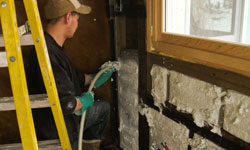 No, it's not the nickname of Greek NBA player Kosta Koufos. Instead, Air Krete is the most common trademarked name of a foamed cement used instead of fiberglass or other insulation to keep your house toasty warm in the winter and relatively cool in summer. It may also help keep the planet cool, because in the long run, it pays back its carbon cost of manufacturing with durability and longevity. It's tough as nails, impervious to rodents and fireproof. Oh, and it won't kill you with carcinogenic microfibers like traditional fiberglass insulation. And you have to admit that's a plus.

But aside from saving money, headaches, the environment and your life, what really matters about Air Krete are the fun facts you won't learn about on its Wikipedia page. Keep reading to find out some of the real reasons you should explore Air Krete.

Air Krete's makeup is unique, and it doesn't contain harmful materials. It's made from air, water and magnesium oxide (MgO) cement. When seawater reacts with limestone, it creates magnesium hydroxide, or Mg(OH)2. This is milk of magnesia, and while it might be great for your upset stomach, it's not so good for the R-value of your walls.

However, the process of electrolysis splits off a water molecule, creating H2O and MgO, which is, in fact, good for the R-value of your walls when it's blown in, allowing the paste to trap bubbles of air. And because MgO is used in many vitamin supplements, it's safe for you to breathe in. 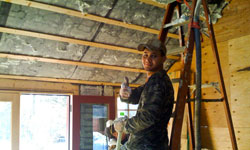 Air Krete, while not a substitute for structural cement, is more eco-friendly than traditional Portland cement.
Photo courtesy of Air Krete Inc.

By volume, Portland cement is the most common manmade product on Earth; it's a component of concrete, mortar, stucco and grout. In the year 2000, the manufacture of Portland cement also added 829 million metric tons of carbon dioxide (CO2) into the atmosphere. That's 1.25 tons of CO2 for every ton of cement produced [source: Hanle et al].

However, the manufacture of Air Krete releases only 20 to 40 percent of the CO2 of traditional cement, mostly due to the source of Air Krete's primary component being as plentiful as the waters of the ocean rather than mined as limestone from mountain hillsides. Not that Air Krete is a substitute for structural cement, but the name "cement" that tends to scare off the environmentally conscious deserves a second look in this case.

What's that you say?

By any standards, Neil Young's music is loud. So his recording studio in Santa Cruz needed to withstand noise and lots of it. The same was true of the Musician's Institute in Hollywood. To have even an inkling of a chance of keeping the neighbors happy, both installed Air Krete, which acts as a very effective sound barrier in addition to providing insulation. This is because sound waves depend on vibrations transmitted from air making anything in its path vibrate, which then transmits the vibration to sound waves on the other side and finally to our ears. And once it's dried, Air Krete is simply too rigid to vibrate. 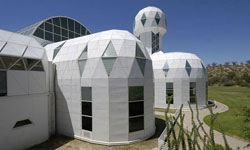 The Biosphere II visitor's center is one of the most famous buildings to be insulated with Air Krete.
Photo courtesy of Air Krete Inc.

When the $200 million, 3.15-acre enclosed space of Biosphere II opened in 1991, needless to say, people were curious. But these curious throngs couldn't simply be admitted to the closed system of the biosphere itself, so a visitor's center was built -- and insulated with Air Krete.

The New York City headquarters of the Audubon building was also insulated with Air Krete, in what the building's architect called a "massive thermal shell upgrade" that allowed the 1890 building to save $100,000 in energy costs per year [source: Croxton Collaborative Architects].

This is to say that not only is Air Krete environmentally sound enough for use by even the most demanding environmental organizations, but also that its functionality has been vetted by major corporations.

There's a wonderful video posted on YouTube of a demonstrator taking a gas torch to a penny that sits on a chunk of Air Krete [source: YouTube]. The penny melts, but the Air Krete appears completely unaffected.

To prove the material's fireproof qualities, a contributor to a green design forum described how, after he started a fire in the living quarters he had built in an old barn, the fire completely gutted the living space. But that's where it stopped. The living quarters were insulated with Air Krete, which the local fire department credited with blocking the fire's spread to the barn structure [source: Air Krete]. 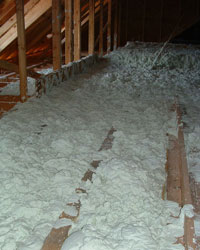 One of the big advantages of insulating with Air Krete is the material's unique way of repelling pests.
Photo courtesy of Air Krete Inc.

As you might expect of a super-hard, super-tough substance that sprays as a liquid and thus plugs any available route within walls, Air Krete presents an impenetrable barrier to pests. But the mechanism isn't what you might think.

Air Krete dries to a porous, almost pumice-like consistency, trapping air bubbles inside the same way traditional insulation uses a latticework of fiberglass fibers to trap air. It's this "air" and not the "krete" that actually does the insulating. And this dry, pumice-like lattice sucks the moisture out of anything it touches, pests included (imagine touching a very cold ice cube with a wet finger -- it sticks).

Needless to say, pests would rather their moisture and oils stayed on their insides, so they tend to avoid Air Krete like kids do brussels sprouts.

In the construction industry, the term R-value refers to a material's thermal resistance. Basically, if a substance can hold very different heats on either side of it, it has a high R-value. The quantity is measured by the inch -- the more insulation you stack, the greater its combined R-value. It would take quite a stack of traditional concrete to equal an inch of Air Krete.

For Air Krete, the R-value is 3.9 per inch. Compare this to R-values of 0.8 for concrete without the trapped air, 1.45 for straw bales and around 3.1 for most types of high-density fiberglass batts, and Air Krete comes out on top [source: Johns Manville Insulation]. 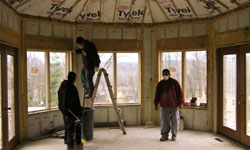 Once installed, Air Krete won't settle -- it stays in place for years and doesn't need to be reapplied.
Photo courtesy of Air Krete Inc.

Once your insulation is in place, you want it to stay in place. The problem with some sprayed foams -- or any other things you can imagine stuffing into your walls to keep the heat in and the cold out, or vice versa -- is that they tend to settle into a little mass of compacted sludge at the bottom of your wall cavity. That tends to defeat the purpose. All it takes to hold Air Krete up is a lattice as flimsy as chicken wire. And once the material sets, it doesn't settle. Its initial dried form is the form it keeps for many, many years.

When it comes to the look and feel of the material itself, Air Krete is also unique, and it changes as it's applied. The Energy Savers Web site of the U.S. Department of Energy describes the consistency of Air Krete as "similar to shaving cream" upon application. Once it dries, its consistency is more like a "thick pudding" [source: U.S. Department of Energy]. Some also describe it as having a pumice-like consistency. 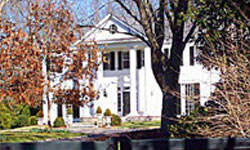 After Al Gore, caped crusader against climate change and recipient of the 2007 Nobel Peace Prize, was rather inconveniently called to task for the massive energy use of his Tennessee home, he remodeled to make his abode greener, and the updates included Air Krete. Along with solar panels, geothermal energy, fluorescent light bulbs and LEDs, the addition of Air Krete helped the home cut 11 percent off the previous year's summer energy bill in a time when most area houses went 20 to 30 percent over the previous year's bill due to a heat wave. Perhaps if we all followed Al's example and installed Air Krete, there would be fewer of these summer heat waves.

For more information on green building materials, check out the links on the next page.