by Matt Cunningham
Prev NEXT
1 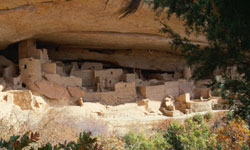 The cliff dwellings at Mesa Verde National Park in Colorado were some of the earliest green homes.
Stockbyte/Thinkstock

Few images of the American Southwest are as iconic or familiar as those of the cliff dwellings at Mesa Verde National Park in Colorado. During the period from roughly 600 to 1300 A.D., the Pueblo people lived in this city that was literally built beneath the arch of a large, overhanging cliff. Inhabitants of the city's 600 structures used a series of balconies and ladders to reach their homes, and they were protected from intruders by the natural fortress around them [source: National Park Service].

Mesa Verde is perhaps the most dramatic example of a design feature found in many of the historic green structures on the list. It follows a philosophy of working with the natural surroundings rather than against them. The Pueblo people used the materials at hand: rough-hewn stone from the arid desert. While this is a practice as ancient as the first human-constructed dwellings, it takes on a green meaning when one considers the transportation costs that go into moving and using modern construction materials.

The Pueblo people took advantage of a natural feature that would protect them from wind, rain and snow without major construction efforts. Modern green construction may lean heavily on technology such as active solar power, geothermal heat and high-efficiency appliances, but as the breathtaking structures at Mesa Verde show, green building can be as much about logic and practicality as the latest high technology.

To learn more about green building, check out the links below.