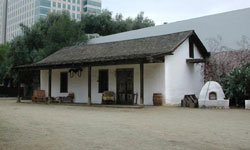 The Peralta Adobe is the oldest home in the California city of San Jose. Historians believe it was built in the late 1700s, and that it's the last standing remnant of El Pueblo de San Jose de Guadalupe, the Spanish settlement that became San Jose [source: Waymarking.com]. Today, the Peralta Adobe is preserved, along with the Victorian-period Fallon House, as living examples of the southwestern city's past [source: History San Jose].

Adobe is a mix of clay and sand that can form extremely long-lasting bricks, walls, floors and other structures. In arid climates, like the deserts of the American Southwest, adobe has been used for centuries as a convenient building material.

Along with that convenience, adobe is an effective option for building energy-efficient structures. Adobe has the ability not only to provide good insulation, but also to retain heat and release it slowly -- think of the steady, even warmth that makes a clay oven such an effective way to cook pizza or bake bread. Passive solar construction, such as placing a greenhouse on the outside of a south-facing adobe wall to provide solar heat to the home, is one of many modern green construction techniques that makes the most of adobe's properties [source: Wilson]. But for the early settlers who built structures like the Peralta Adobe, the material was as much about convenience as energy efficiency.