by Melanie Radzicki McManus
Prev NEXT
7 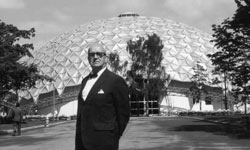 Ever seen a geodesic dome home? You know, those sphere-like homes made from a rather complex network of triangles? You've got R. Buckminster Fuller, or "Bucky," to thank for that. Fuller was an early green architect whose primary passion was humanitarianism. He felt the main two problems in the world were homelessness and hunger, and worked his entire life to find simple, economical solutions to them. One example of this is his Dymaxion House, a pre-fab, round structure supported by poles. The home was heated and cooled by natural means, and its shape minimized heat loss and required fewer materials to construct than a typical home, making it environmentally friendly and affordable [source: Buckminster Fuller Institute]. Fuller worked on this project after World War II, when there was a housing shortage in the U.S. Unfortunately, although thousands of American eagerly placed orders, funding problems caused him to cancel the project [source: PBS].

It was after the Dymaxion House fiasco that he developed the geodesic dome, which quickly caught the attention of the American government because it was lightweight yet strong, and could be quickly assembled -- perfect housing for soldiers stationed overseas. He made thousands for the U.S. Army, and many others became homes -- very energy-efficient homes, thanks to the design; a dome's spherical structure allows air and energy to freely circulate, which means heating and cooling occurs naturally [source: Buckminster Fuller Institute]. Fuller lived in one himself in Carbondale, Ill., where he taught in the Design Department at Southern Illinois University. Restoration of his home is scheduled to be completed in 2012, and will eventually include a living museum and learning center [source: The Fuller Dome Home].