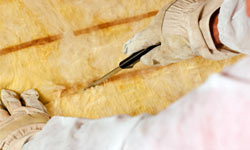 Is there anything soybeans can't do? You can find them in milk, candy, disinfectants, insecticides, cooking oils, margarine and now, home insulation. Chicago homeowners Jason and Jennifer LaFleur learned all about insulation when they began renovating their kitchen. They found that they didn't need to buy conventional fiberglass insulation. Instead, they sprayed soybean foam insulation into their walls [source: Pandolfi].

The LaFleurs discovered what other homeowners are now learning -- that the color of home insulation isn't just pink. It's also green -- as in eco-friendly. Whether the insulation is made from shredded denim, hemp or sheep's wool, alternative insulation can not only save homeowners money, but also help the environment.

Reducing energy costs is one of the most important factors in selecting insulation. In cold weather, insulation is used to keep the warm air in. In warm weather, it keeps the hot air out. And that's important because HVAC systems are responsible for roughly 44 percent of all the energy used in a home [source: Pennock]. But the right insulation can reduce an energy bill by 10 to 30 percent [source: Pennock].

Technically speaking, home insulation is green by its very nature because it saves energy. Then why is "green" insulation greener? For some people, it's green when it contains a high percentage of recycled materials; for others, it's when it doesn't contain harmful substances that can cause health problems. Still, others consider insulation green when it's made of natural materials [source: Carter].

Whatever your definition of green, the best way to quantify how well insulation works is by its R-value, which measures its resistance to heat flow and ranges between less than R-1 and R-60. The more the material restricts the flow of heat, the higher its R-value [source: U.S. Department of Energy]. Generally, the higher the R-value, though, the more it costs [source: Carter]. Homes should be insulated with enough material to achieve an R-value between R-30 and R-60 [source: U.S. Department of Energy]. That means if the type of insulation you choose has an R-value between R-3 and R-4 per inch, you'd need to have at least 10 inches of the material to achieve an R-value of R-30.

Interested in greening your insulation? Read on to see our top five picks for eco-friendly insulation. They're renewable, made from recycled materials and will save you money on energy costs.

Sheep live in some of world's harshest environments. Dall sheep, for example, love cold climates, including the frigid temperatures of the Arctic. They live on alpine ridges and steep rocky slopes, and are able to adapt to these extreme conditions because of their wool. In recent years, scientists have taken the insulating properties of sheep's wool and applied them to home construction. A 24-inch roll of R-13 wool insulation costs around $60.

When wool fibers are compressed, they form millions of tiny air pockets. These pockets trap air, which keeps the animals -- and homes -- warm in the winter and cool in the summer [source: SheepWool Insulation]. Plus, wool is very breathable, which means it can absorb moisture from the air without affecting its capacity to retain heat [source: SheepWool Insulation]. Specifically, the outer layer of wool fiber is resistant to water. However, the fiber's inner layer loves water and can absorb about one-third of its weight in moisture without ever feeling damp. And when wool becomes moist, it generates heat, which in turn prevents condensation. The R-value of wool falls between R-3 and R-4 per inch of thickness [source: Coloradoenergy.org]

What does this all mean? If you insulate your home with wool, you don't need to adjust your heating or cooling systems as often as you would with other materials and that saves money. Wool insulation keeps buildings cool in the day and warm at night, and it's more fire resistant than other types of insulation [source: SheepWool Insulation]. 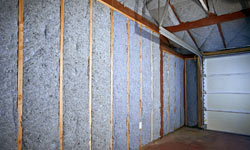 Cotton insulation, like this UltraTouch Denim from Bonded Logic, contains no formaldehyde, which scientists have linked to some types of cancer.
Bonded Logic

Ever wonder what happens to all the scrap cotton denim that's left over when designers are making all of those blue jeans? Well some of that material actually gets recycled into insulation. Cotton is a natural and renewable resource, which makes the plant one of the greenest insulation products on the planet. Cotton insulation is similar to fiberglass insulation in several ways. For one thing, it can be rolled into batts. Additionally, the R-value of cotton insulation and fiberglass is the same, roughly R-3.2 to R-3.7 per inch of thickness [source: Build It Green].

However, unlike fiberglass, cotton insulation does not contain formaldehyde, which scientists have linked to some types of cancer [source: National Cancer Institute]. Cotton's fibers will not cause any respiratory problems. The material is very good at absorbing moisture, and when treated with boric acid, is flame retardant. Cotton insulation is also insect repellent. However, one of the drawbacks of cotton insulation is that it costs twice as much as fiberglass [source: Build It Green].

If there's a Superman of home insulation, it's aerogel. It has an R-value of R-10.3 per inch of thickness [source: Meinhold]. So what makes aerogel so super? In a word, air. Chemical engineer Samuel Stephens Kistler first invented aerogel in 1931. According to legend, Kistler made a bet with a friend that he could replace the liquid in a jelly jar without causing the jelly to shrink. Kistler won the bet. So how'd he do it? He removed the liquid and replaced it with air [source: Meinhold].

Today, scientists make aerogel by removing the liquid from silica under high pressure and temperature. What's left is a material that is very light and more than 90 percent air. Aerogel's molecular structure makes it difficult for heat to pass through [source: Nusca]. As insulation, aerogel comes in sheets that can easily be tacked on to the studs in a wall. In fact one type of aerogel, ThermaBlok, has a peal and stick backing for easy installation [source: Thermablok]. Aerogel insulation is very expensive, though, and sells for up to $2 a foot [source: Meinhold].

Polystyrene doesn't sound like a green material. In fact, it's a form of plastic. Yet, polystyrene is a fabulous insulator with R-values that range from R-3.8 to R-4.4 per inch of thickness, and so it's considered green because it helps save so much energy [source: U.S. Department of Energy]. Polystyrene insulation comes in rigid foam boards that make it easy to insulate any part of a building, from the roof to the foundation [source: U.S. Department of Energy]. Not only will rigid polystyrene provide your home with good thermal resistance, but it will also add structural integrity to your walls. But you don't have to go with the rigid foam boards; polystyrene insulation also comes in spray foam. And even though it's plastic and takes long time to naturally degrade, it can be recycled.

Did you know insulation also has a U-value? U-values gauge how much heat passes through a particular material. The lower a material's U-value, the better it insulates. 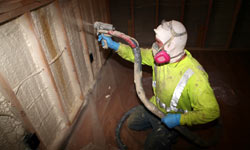 Perhaps no home insulation seals your house as completely and as thoroughly as the spray-on foam insulation known as Icynene, which is made from castor oil. When contractors spray the substance onto a wall or ceiling it has the thickness of paint. Once it hits the surface, Icynene expands nearly 100 times it volume. The puffy sponge cake-like substance creates a thick blanket of insulation that tightly seals air leaks [source: Cabot]. Not only does Icynene stop drafts, it also muffles noise [source: Cabot]. Icynene has an R-value of R-3.6 per inch of thickness, which can reduce a home's energy bill by 30 to 50 percent [source: Missouri Insulation & Supply].

Icynene works so well because it traps air in tiny bubbles during the foaming process. As the foam cures, the air remains in place. Although it looks like the top of lemon meringue pie, Icynene allows water vapor to escape, which prevents mold from forming [source: Cabot]. However, Icynene has a couple of problems. First, it's expensive -- about three times the cost of fiberglass. Also, since Icynene seals a house so tightly, builders need to install a ventilation system. And in colder climates, that ventilation system will have to include an air exchanger to warm incoming air [source: Cabot].