Is construction site recycling worth the effort? 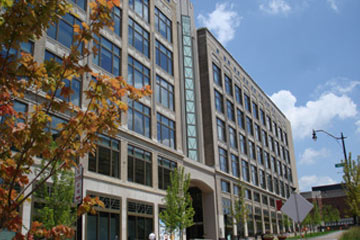 Developers transformed Columbus, Ohio's Lazarus Building into one of the "greenest" in the United States, keeping 75 percent of the original structure and recycling the rest. See more architecture pictures.
downtowncolumbus.com

Perhaps no edifice in Columbus, Ohio is more aptly named than the Lazarus Building. Built a century ago, the former department store was a go-to destination for those living in the Midwest. With as much room as the 1-million-square-foot Target Field in Minneapolis, the Lazarus Building was a landmark that eventually fell into disrepair. By 2004, the building was vacant and contaminated with asbestos.

Three years later, the Lazarus Building rose from the dead, much like its biblical namesake. A $60-million restoration and renovation project turned the hulking structure into a massive retail and office complex [source: McDonald]. During construction, developers transformed the Lazarus Building into one of the "greenest" buildings in the United States, keeping 75 percent of the original structure, while reusing and recycling much of the material they found.

Whether builders are renovating new buildings or demolishing old ones, recycling construction debris pays off big-time, while simultaneously helping the environment. If done correctly, developers can recycle up to 95 percent of all waste materials and save tens of thousands of dollars [source: Lennon]. Go to the next page to find out why recycling construction and demolition debris is worthwhile.

Did you know construction and demolition waste are the largest sources of trash in the United States, accounting for roughly 325 million tons of recoverable waste each year [source: Construction Materials Recycling Association]? Did you also know that construction sites use 40 percent of all raw materials that Americans consume annually, including steel, concrete, glass and wood [source: Lennon]?

There are two ways to recycle at a job site: commingling and source separation. Each has its benefits and problems. Commingling, or mixing recycled items together, allows workers to quickly throw debris into one bin, saving time and cutting down on the number of recycling containers on the job site. However, construction companies have to pay a processing center to separate the waste [source: Lennon].

The second type, source separation, is often the best way to recycle on the job. Source separation involves sorting out construction material by hand and tossing the waste into individual bins. Although it's more complex than commingling, source separation allows builders to recycle at higher rates and at lower prices. That's because builders can ship the trash directly to market, eliminating the expense of hiring a processor to sort the material. In addition, hand-separated debris is generally worth more than commingled trash because the hand-separated debris contains fewer contaminants.

There are disadvantages to source separation, however. In addition to being more difficult and time-intensive, a bevy of recycling containers can clog up small worksites. Plus, each of those containers has to go to a specific recycling center, creating more logistical work for project managers [source: Lennon].

Builders need to do their homework before recycling, if they want to save the most money. Each recycling plan needs to be tailor-made for individual projects. In the long run, though, recycling is less expensive than just bulldozing the trash away. While construction companies will spend a bit more money and time up front to carefully separate waste, at the end of the day, they'll save on landfill fees, and will also get various tax credits from the federal government if they recycle.

In Massachusetts, for example, it costs about $136 per ton to dispose of concrete, brick and block in a landfill. However, it costs $21 per ton to recycle the same material. Recycling other construction debris, including drywall, metal and glass, is also cheaper than dumping the rubbish in a landfill. Savings can amount to tens of thousands of dollars for one construction project [source: Lennon].

Yet, builders don't have to recycle everything to save money. The best recycling programs take aim at high-volume materials that have the highest market value [source: North Carolina Department of Environment and Natural Resources].

Economics aside, reducing waste from a construction project is perhaps the most important reason to recycle. Consider these statistics from the Deconstruction Institute that show the significance of recycling:

For even more info on why recycling makes sense, click to the next page and read on.

How do I dispose of my construction waste without bruising my environmental conscience?
Is it greener to renovate or rebuild?
Why salvage construction materials?

Metal vs. Steel: Is There a Difference?
Why hire a contractor if subcontractors do all the work?
How Fly Ash Concrete Works