Why should you double dip your nails? 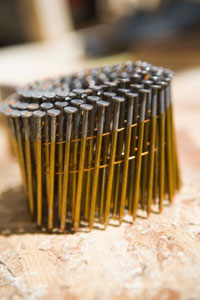 When it comes to going green, the term "green nails" has nothing to do with a radical, neon-hued manicure. In fact, it's about those tiny, vital parts of all construction that work hard to hold things together. We rarely consider the nails that go into building when we think of greening our environment and homes. However, there are ways to treat construction nails that make them friendlier to the environment, help them last longer and even make them look better for years to come.

When you make your construction nails last longer, you don't need to replace them as often. And, of course, by using fewer nails over the life of a project, you're reducing the number of nails that end up in landfills. One popular way of making your nails last is called double dipping.

So what is double dipping, and why would you want to bother with it? Nails are most often made of steel, which contains iron. Rust, or iron oxide, occurs when iron, water and oxygen meet. Therefore, an untreated nail is subject to rust, which then makes the nail susceptible to corrosion, compromising its strength and, eventually, the strength of the structure.

You can make a nail more resistant to this dangerous rust by treating the nail, or dipping it. Dipping, or galvanization, is the process of covering the nail by submerging it in molten zinc. The steel of the nail and the molten zinc create an alloy layer that protects the nail from corrosion. That way, if corrosion does occur, it will affect the outside protective layer before it reaches the nail itself.

For additional protection, galvanized nails can be dipped into molten zinc more than once, which is called double dipping. Next, we'll look at some of the advantages of double dipping your nails.

The Pros of Double Dipping

Double dipping makes your nails longer lasting and more eco-friendly. When rust forms on a nail, the nail corrodes, making it more susceptible to breakage than a treated nail. If dipping your nails drastically slows the corrosion process, it follows that double dipping them will make them last even longer.

Of course, the longer your construction nails last, the less often they'll need to be replaced. Double-dipped nails are therefore friendlier to the environment, making them greener than untreated nails, which must be replaced and discarded (or hopefully recycled) more often.

Another major benefit to double-dipped nails is that the materials that are bonded with the nails will remain stain-free for longer. Untreated nails used in visible areas -- such as decks, stairs or windows -- will eventually rust, leaving unsightly brown and sometimes black stains that form from the corrosion. Double dipping keeps these stains at bay.

Aside from better resistance to rust and corrosion, there's another practical reason why double-dipped nails are better than untreated nails. Double-dipped nails actually form a better bond with the materials they're holding together than untreated nails do, making structures stronger and more durable. The reason for this is that the zinc coating is rougher than the smooth surface of an untreated nail. Coarse zinc particles cling to the surface of the nail, enabling the nail to get and maintain a better grip on the material being hammered. This adhesive quality makes double-dipped nails especially useful for the parts of the house that are most exposed to the elements, such as window frames, stairs, benches and decks.

For more information on nails and green construction in general, check out the links on the next page.