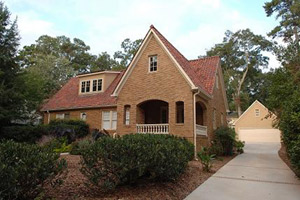 Warren Bond/Courtesy of Seville Consulting
The post-renovation exterior of an EarthCraft House. Builders removed and renovated the roof, and a dormer was added for an attic bedroom. See more green building pictures.

­Scientists have been painting an increasingly gloomy picture of the Earth's environmental health. No matter where you stand on environmental issues, it's hard to avoid the scientific community's mounting concerns related to pollution, ozone depletion and global warming.

Even with our increa­sed focus on these issues, the United States still utilizes resources at a greater per capita rate than any other country in the world. In the United States., we consume over 10 tons of new resources each year per citizen, including virgin wood, fuels, and other materials. To make matters worse, 90 percent of these materials become waste within one year [source: Howard].

The building industry is one of the biggest causes of our current environmental crisis. According to the United States Green Building Council (USGBC), building construction and operation represents 70 percent of electricity consumption, 39 percent of energy use, 39 percent of carbon dioxide emissions, 40 percent of raw materials used, 30 percent of waste generated, and 12 percent of potable water consumption here. Consider this: An entire acre of forest must be cleared just to build one single 1700 square-foot home [Source: Global Green].

­You would expect that with all these resources being expended, we would at least produce greener buildings, right? Wrong. More than one third of the buildings in the United States suffer from p­oor air quality, leading to $15 billion in productivity losses each year for American businesses [source: Global Green]. In addition to the financial costs of poor air quality, consider its impact on our health. Poor air quality leads to respiratory illnesses, weaker immune systems and a lower quality of life.

While the commercial building industry has taken great strides towards streamlining the construction process and producing greener buildings, residential construction has a long way to go. One company that has taken the lead towards creating environmentally friendly homes in the United States is EarthCraft House. Earthcraft is a residential green building program of the Greater Atlanta Home Builders Association in partnership with Southface Energy Institute, both of which are Atlanta based non-profits that has developed its own guidelines and ratings system to help homebuilders create eco-friendly homes. The EarthCraft system is currently the largest system for green home development in the country and fills a much-needed niche in the residential market.

In the next section, we'll learn more about the history of EarthCraft, how the company has evolved and what the future holds for this company and its green building programs.