The Components of an Enertia Home 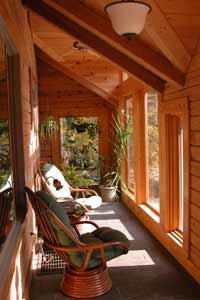 The sun space works by soaking up sunshine, and not only helps drive the home's convection circuit but also serves as a pleasant sitting spot that opens onto the main living area of the house.
Photo courtesy of Enertia Building Systems, Inc.

­Before we dive into how the Enertia Building System (EBS) actually operates, let's take a closer look at some of the key components these homes encompass:

Southern yellow pine: Although other types of timber can be used, southern yellow pine is the hallmark tree of EBS co­nstruction. That's because according to Enertia Building System's president Michael Sykes, it's a fast-growing tree that's loaded with resin and other properties, which make it excellent at absorbing energy and slowly releasing it over a period of several hours. It can also be augmented to have an even greater ther­mal mass -- the capacity of heat it can absorb -- by applying various patented treatments. This means that instead of attempting to deal with heat by utilizing the air enclosed within a house, the house itself holds and releases the thermal energy necessary to keep the temperature in check.

The primary space: This is the main living area of the homes. All the domicile mainstays like bedrooms, kitchens and living rooms of EBS houses are contained within the primary living space, which is alternately called the inner shell. The use of wood isn't limited to the outside of the house; you'll find it here too.

The dynamic envelope: Also known as the buffer zone, the dynamic envelope surrounds the entire inner shell and is encased by the home's outer shell. This is where the magic happens; consisting of the basement, southern sun space, attic and northern double wall, the dynamic envelope contains a solar-powered convection current, which carries hot and cold air around the residence. In the winter, the air current is largely fueled through the bank of windows covering the southern side of the house, while in the summer it gets its zest from the series of windows positioned on the roof.

­The buffer zone also promotes ventilat­ion and serves double duty as the secondary living space. Because the temperature of the dynamic envelope isn't as sta­ble as­ that in the primary space, this portion of an Enertia home is typically geared towards purposes like laundry rooms, recreation rooms, offices or workout rooms.

The Sun Space: The southern wall of an Enertia home is a striking sight. Windows dominate the view, soaking up lots of solar power. In the winter, the sun space acts like the engine of the house, powering the circling convection current to fill the wood with thermal energy. This energy radiates into the primary space, warming the home. Grills in the floor of the sun space allow air to flow up from the basement and continue up into the attic.

Now that we know the main parts of the system, let's see how they all come together on the next page.