The Enertia Building System in Action 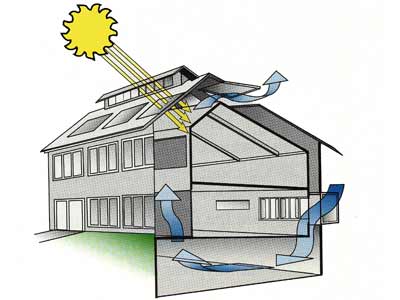 ­To get a closer look at how the Enertia­ Building System functions, we need to split it up into four distinct scenarios.

Daytime in the winter: In the winter, when the sun travels low across the sky, thermal heat from the sun enters the house mainly through the large array of windows along the southern wall and warms the air in the sun space and the main living area. As the air heats up, it rises and flows around through the attic, warming the wood as it passes. Having transferred warmth to the wood the air cools and sinks, coming down the envelope along the north wall. In the basement, the temperature of the air stabilizes to match the steady temperature of the Earth's crust and is ready to complete another convection loop around the dynamic envelope.

Nighttime in the winter: The pattern of air movement reverses during winter evenings. As the sun sets, the air in the sun space cools a touch faster than the air in other parts of the envelope and it sinks down into the basement before rising up again as it's warmed by the radiant heat stored in the wood. According to Sykes, timber such as southern yellow pine takes about 8 to 12 hours to fully release the heat it has stored, warming the house overnight.

Daytime in the summer: As the seasons swing towards summer, the owner of an Enertia house needs to perform two tasks to prepare for the hot days ahead: open the windows both in the attic and on the northern side of the basement. By doing so, he or she switches out the closed-loop circuit for an open one and enable the house to perform in summer mode. Because the sun's path is higher in the sky during the summer, much of the sunlight is reflected away while the rest goes through a convection cycle which is mainly powered by the windows in the roof. These windows (which open only onto the dynamic envelope and not through to the main living space below) rush heated air out through the rooftop ventilation. This creates a vacuum that draws more air in through the basement windows where it's cooled by the Earth's lower temperatures. Then the cooled air is drawn up by the convection current and proceeds to leech off some of the heat as it makes its way around and out the attic windows.

Nighttime in the summer: Because there's no sun to pull cool air up into the house during summer nights, ceiling fans can be employed to keep the circulation going and ensure things won't be a little too toasty in the a.m. This is one example of keeping the house inside an individual's comfort range. On the next page, we'll examine this concept a little more closely while we take a look at the capabilities of the Enertia Building System to see how it performs in different climates and conditions.