Has green construction made an impact on the environment yet?

Browse the article Has green construction made an impact on the environment yet? 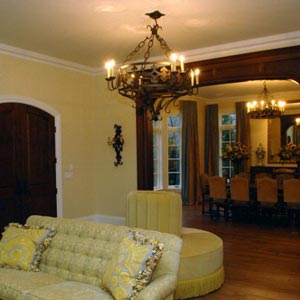 Besides being noisy and dusty, construction projects also come with a hefty environmental footprint, and that's what green construction aims to fix. Green builders look at the entire construction process from material sourcing to the building's energy use, and try to construct the most environmentally friendly structures possible.

The major factors that green builders look at are: energy and water efficiency, the impacts of the materials themselves, indoor air quality, and waste both on-site and in the completed structure. Many green builders also take the lives of the buildings' inhabitants into account, so convenient access to public transportation and green space can also be considered part of green building.

The green building industry has been around since the turn of the last century, but it didn't begin to really take root until the late 70s after the rise of oil prices made people think twice about relying so heavily on fossil fuels [source: US Green Building Council].

As it becomes more hip to go green, many construction companies do the bare minimum to qualify. Green building proponents are calling foul, saying that what many builders are actually doing is adding "green" accessories (like a solar panel) to otherwise wasteful buildings [source: Bredenberg].

Buildings account for almost 70 percent of America's electricity use and 12 percent of our water use, and a major part of green building is reducing those numbers [source: EPA]. Instead of a conventional gas or electric hot water heater, a green builder might install a solar hot water heater which uses the sun's energy to heat the building's water. Green builders also beef up a building's insulation, so you won't have to run the heat or air conditioning as much to keep the temperature comfortable inside. These types of upgrades reduce the building's environmental impact, and they benefit the inhabitants by reducing energy bills. Glen Meyers, editor of the Web site Green Building Elements, says this is why energy efficiency upgrades are the most common green building technique.

But even the best-intended gestures have unintended consequences. A 2010 study found that the impact of installing thick, blown insulation actually outweighs the energy efficiency benefits because after a certain amount of thickness the environmental impact of producing, shipping, and installing the insulation outweighed the energy savings [source: Wilson]. Green builders also argue that you have to look at the building's overall footprint – that there's no such thing as a green mansion, for example [source: Bredenberg]. So, how do green builders measure their impacts?

A common way to think about a building's impact is to look at it almost like a living thing. The "life" of the structure begins at construction, continues as people use it as living or work space, and its life ends when builders dispose of materials after demolition. You have to consider not just what materials you're using but where they come from, how they impact the environment as part of the building, and where they'll go when their "life" comes to an end.

Energy efficiency is the most common green building focus, because the benefit is clear and immediate: lower utility bills. Green construction's overall environmental impact is tougher to measure, but there are some good case studies on energy and water usage in certified buildings that can give you an idea of the difference that green building can make.

A 2011 survey of 21 commercial LEED (Leadership in Energy and Environmental Design) buildings showed an average energy savings of 27 percent over more conventional structures. Interestingly, the number of LEED points (given for green construction techniques by the Green Building Certification Institute which determines the certification level) didn't directly correlate to the amount of energy savings [source: Diamond]. That means that a LEED Silver building could be more energy-efficient than a LEED Gold structure, depending on what green building elements the designers focused on.

The other major environmental impact is reducing the carbon dioxide (CO2) emissions in the construction process from processes like producing and shipping materials and running equipment on-site. A February 2009 EPA report looked at green building's potential to reduce these emissions. While the researchers admit that it's hard to measure the construction industry's overall CO2 emissions, the study estimated that through green construction techniques like on-site recycling and using alternative fuels for trucks, the construction industry could reduce their yearly CO2 emissions by almost 8 million metric tons [source: EPA]. To put that in perspective, the U.S. emitted 6,865.5 million metric tons of CO2 in 2010 [source: EPA].

It's pretty clear that green building techniques can reduce energy and C02 emissions, which benefit the environment, but what is green construction's true impact?

What is green construction's impact? 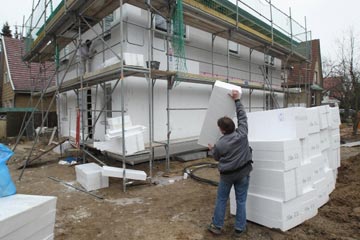 You could argue that green construction's biggest impact so far has been in raising consumer and industry awareness because the actual number of green buildings is still very small. In Europe, the total number of green buildings is less than 1 percent and is expected to quadruple to more than 2 percent by 2016, as EU countries try to conform to regulations and react to higher energy prices [source: Pike Research].

Back in the 80s, Germany began subsidizing more efficient buildings, and building codes have followed suit, as these structures proved the benefits of green building in terms of energy savings and techniques became more affordable [source: Brussels]. That's the big payoff that we're really seeing from current green building projects: each project shows that green construction is doable, that it makes a difference, and that builders and manufacturers can find ways to make green upgrades more cost-effective.

In the U.S., green construction made up around 17 percent of the single-family residential construction market in 2011, up from just 2 percent in 2005 [source: Bredenberg]. But keep in mind when you look at that number is that it's 17 percent of current projects -- not all buildings -- and the big market share increase is partially due to the decrease in home construction.

Builders say that "higher quality" and "increases in energy costs" are the main reasons for increased green building activity in the U.S. The biggest obstacles are "higher perceived first cost" and "lack of consumer education," according to a McGraw-Hill Construction report.

Both in the U.S. and in Europe, we have a long way to go on the green construction front if we're going to stay ahead of dwindling resources and rising energy costs. Green construction is a growing field, but it's still only a small part of the construction industry [source: Watson]. Its biggest impact right now isn't so much on the environment as it is showing that we can make more efficient, healthier buildings as builders find ways to reduce the up-front costs for constructing more efficient buildings.

We just completed an addition on our house last spring, so my husband and I both got pretty familiar with living in the midst of a construction site. This was no small project – we knocked down walls, moved windows, and added two bedrooms and a bathroom. One thing that really struck me during the project was all of the waste. I mean, there were piles of it! We salvaged what we could, but at the end they still hauled off a lot of trash that was landfill-bound. The other thing that stood out to me was how much stricter construction codes were about energy efficiency now. The rooms we added to the back of the house are noticeably cooler in summer and warmer in winter than the front, which was built in the 20's and remodeled in the 90's.

In researching this article, my first thought was that I wish I'd had this assignment a year ago! I learned so much about options to make the construction process greener, from reducing waste on-site to lower impact materials that we could have asked for in our home addition. Really, my knowledge about green building at that time was limited to things like zero VOC paint and formaldehyde-free insulation. That's only the tip of the green building iceberg!