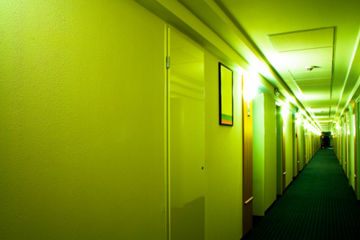 Is it us, or does that hotel look a little green? See more green science pictures.
iStockphoto/Thinkstock

Not so long ago, the word "green" was more synonymous with the almighty dollar than with sustainability. Environmentalism was the milieu of a certain harebrained, hippie-ish fringe element. The mere suggestion of energy conservation was met with near-universal eye rolling, as if an entire culture was hearing a curmudgeonly father figure barking for the thousandth time, "Turn off the lights! Do I look like I'm made of money?!"

Until recently, even in circles where rudimentary efforts at sustainability were normally observed, hotel stays remained an excuse for unabashed excess. Guests used fresh towels at every available opportunity, left the television blaring even when they were away from their rooms, plunged the air conditioning to icily delicious lows and delightfully consumed every miniature freebie that they could get their hands on.

Even as the cultural tide began inching toward sustainability with the gas crisis of the 1970s, hotels remained a last bastion of wanton consumption. In his book "Global Energy Innovation: Why America Must Lead," author Woodrow W. Clarke notes that luxury hotels were the worst offenders. He writes, "At hundreds, sometimes thousands, of dollars a night for a room, a luxury hotel cannot trim back on customer service...For this reason, luxury hotels have been particularly resistant to change, due to fear that once word gets out that a hotel is cutting back, it will lose its clientele."

Nevertheless, all signs point to the fact that the hotel industry is getting greener by the day. A trend that began years ago with environmentally friendly lodges in fragile ecosystems has bloomed into an industry-wide movement that is setting the tone for green building worldwide. Doug Gatlin, the U.S. Green Building Council's vice president of marketing and development, told Forbes Magazine that the hospitality industry has become "a mainstay of the green building movement" [source: Bender].

From power-generating exercise bikes in Copenhagen to simple printed cards asking guests to reuse towels, the hotel industry is experimenting with all kinds of ways to conserve and recycle.

It's Not Easy Being Green (Certified)

A recent study of business and leisure travelers revealed that the No. 1 green attribute guests prefer is a green hotel certification, such as LEED [source: Millar and Baloglu]. Though respondents indicated interest in a number of energy-saving measures such as refillable shampoo dispensers, energy-efficient light bulbs and linen reuse policies, they seemed to value green certification by a qualified ratings bureau most of all.

At the time of this writing, more hotels than ever before are seeking green certification. In March 2010, the Emory Conference Center Hotel became the first LEED-certified hotel in Atlanta, Ga. Less than a year later, Marriott and Springhill Suites hotels also earned LEED certification. Green-certified hotels employ numerous innovative energy-saving and conserving features, such as room lights that will not power on until a hotel key card is inserted. In countries other than the U.S., hotels boast green certifications from competing ratings systems like Green Star and BREEAM.

Green-certified or not, the hotel industry is without a doubt more energy-conscious today than ever before. Given the nature of the business, investing in energy-saving measures such as water-conserving toilets and energy-efficient appliances saves hotels money in the long run. Some hotels are going even further in the quest to be green. The Crowne Plaza Copenhagen Towers recently tested a pilot program that awarded free meal vouchers to guests who rode electricity-generating exercise bikes connected to the hotel's solar grid.

Though hotels are undoubtedly becoming more energy-aware and are starting to tout their own green achievements, it can still be a challenge to find a green hotel in some places. Luckily, many Web sites offer a variety of "green city guides" to places from Berlin to Beijing.

In 2007, I had the immense pleasure of staying in an eco-campground on Water Island, in the U.S. Virgin Islands near Saint Thomas. Showerheads and sinks had spring-loaded on/off mechanisms, which forced water conservation. There was a composting toilet and a pavilion where guests could store food stuffs in a communal, solar-powered refrigerator. There was even an old-fashioned, wall-mounted can crusher to ensure that our recycling was compacted for easy hauling. The entire experience felt somehow purifying (and not just because the cottages were un-air-conditioned and we sweated a lot!)

Though a stay in a green luxury hotel with first-class amenities is hardly the same thing, I imagine that a soak in a hotel spa or a night in a soft, feathery king-size bed would be all the more delicious if I knew that the tub was heated with solar power and the linens were woven from organic, sustainable plant materials. Like practicing random acts of kindness or throwing open the windows in spring, there's something about going green that just feels good. Since staying in a hotel also feels good, it makes total sense that staying in a green hotel might feel even better.

How do I dispose of my construction waste without bruising my environmental conscience?
Just how dangerous are VOCs in paint?
Why salvage construction materials?