What is the International Green Construction Code?

Browse the article What is the International Green Construction Code? 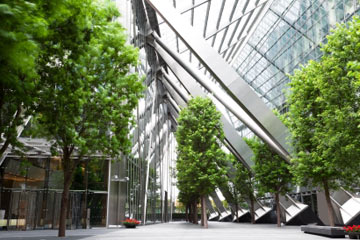 Energy companies always warn customers to be aware of their refrigerators, which are among the biggest energy hogs in a home. But iceboxes may seem like small potatoes when you realize that, in the industrialized world, buildings gobble up a full half of all the energy we generate. Not only that, they're responsible for half of all of the carbon emissions as well [source: Foster + Partners]. To protect ourselves and our environment from these rather destructive behemoths, the International Code Council (ICC) unveiled the International Green Construction Code, or IgCC, in March 2012.

The IgCC is a set of minimum green requirements to be met when building or altering any commercial structure or residential building that's more than three stories tall. Its purpose is to reduce the negative effects of such buildings on our environment. The requirements apply to the entire construction project plus its site, so everyone involved in the building process, from materials manufacturers to design professionals to contractors, is affected. Building officials will be the code's primary enforcers. Here are a few examples of code provisions [source: ICC]:

Like other building codes issued by the ICC, the IgCC may be adopted by jurisdictions (in the U.S., that's generally states or cities) or ignored. If a jurisdiction adopts the code, the intent is that it becomes mandatory for all applicable developments, ensuring major sustainability results. However, a jurisdiction may adopt the code as a voluntary set of guidelines. Jurisdictions also may customize the code by incorporating certain requirements that are pertinent to their particular locales. For example, large cities may wish to add light pollution control measures that aren't necessary in rural areas [source: ICC].

In addition to the mandatory green standards the IgCC lays out, jurisdictions must also require individual projects that follow the code to implement one to 14 green "electives" -- anything from a whole-building life-cycle assessment to stricter recycled-content options. The electives are chosen by the project owner, after which they become mandatory, enforceable requirements for that project [source: Melton].

The IgCC is supported by the American Institute of Architects (AIA), the U.S. Green Building Council (USGBC), producers of the LEED green building rating systems and The Green Building Initiative (The GBI), which created the Green Globes green building rating system, among others. While the IgCC's creator, the ICC, is an American entity, the new code is available for use throughout the world [source: Daggers].

At this point, you may be wondering, why do we need an International Green Construction Code when we have LEED? LEED, or Leadership in Energy and Environmental Design, is the world's top program for guiding the design, construction, maintenance and operation of green buildings. Run by the U.S. Green Building Council (USGBC), there are LEED projects in every state of the U.S. and in 120 additional countries [source: Long].

While LEED and the IgCC have similar goals, LEED is a voluntary rating system. A property owner invites independent third parties to verify that a particular building, home or community was designed and built based on certain principles aimed at human and environmental health, such as energy efficiency and materials selection. Since no one is required to seek LEED certification, most property owners currently don't take the extra measures to do so.

By instituting the IgCC, the hope is that both programs will work in tandem to improve our environment. Ideally, the new IgCC will be widely adopted as a mandatory measure, assuring a basic level of sustainability in all commercial structures. Then, LEED can raise its voluntary certification standards even higher than current levels, thus advancing the field of sustainability [source: Melton].

Not surprisingly, LEED and the new IgCC aren't the only players in the green building movement. The American Society of Heating, Refrigerating and Air-Conditioning Engineers (ASHRAE), for example, released America's first set of green construction requirements in 1975 -- Standard 90 -- then built upon those with Standard 189.1. Unveiled in 2010, Standard 189.1 was a group effort by ASHRAE, the USGBC and the Illuminating Engineering Society of North America (IES) that provided a total building sustainability package for those who wanted to construct green buildings. The ICC was aware of ASHRAE 189.1 and other measures when it developed the IgCC, designing the new code so that its provisions mesh with those in the other codes -- one reason why it has widespread support [source: Melton]. In fact, Standard 189.1 is now a compliance option in the IgCC.

Author's Note: What is the International Green Construction Code?

Hurray for a mandatory energy efficiency code! Not only is it great to see continued efforts to protect our environment, but the IgCC is predicted to add jobs to the economy, according to the U.S. Green Building Council Green Jobs Study.