Browse the article What's the oldest green home in America? 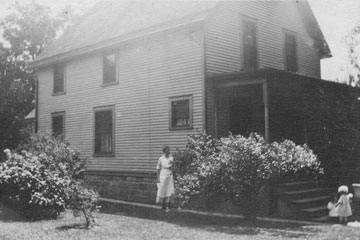 This Victorian-era home, now renovated, is one of the oldest green homes in the country. See more green living pictures.
Photo courtesy of GreenovationTV

Identifying America's oldest green home is not exactly a cut-and-dried process. The definition of "green home" varies, and there are many homes -- some historic -- that boast earth-friendly design features. Plantations dating from before the Civil War may feature cutting-edge green landscape design [source: Monticello]. Mid-century modern architecture may make use of passive solar features and underground construction [source: The Glass House]. And even ancient Americans designed homes to make the most of the natural resources around them, although one can suspect their motives had little to do with carbon footprint and much to do with security and safety [source: National Park Service].

To determine the nation's oldest green home, it helps to pick a standard of measurement to define "green." One popular standard is the measure of how much energy a home uses. And in this regard, there is a clear winner in the oldest green home contest: a 110-year-old house in Ann Arbor, MI, that actually produces more energy than it consumes.

When homeowners Kelly and Matt Grocoff purchased their home, it had many of the features of any Victorian-era fixer-upper: little to no insulation, leaky windows and old building materials like lead paint and asbestos siding. These called for many standard renovations, such as refinishing the hardwood floors and removing the hazardous materials. The Grocoffs easily could have produced a pretty, livable rehabbed home, but they chose to go many steps further by making the home so efficient that it's net zero: It produces more energy than it consumes.

Some of the steps that went into making the home green were fairly basic. By thoroughly insulating the attic and walls, restoring the windows and adding high-efficiency storm windows, the Grocoffs sealed the hundreds of tiny air leaks that often make old houses drafty and frightfully expensive to heat. Likewise, the couple replaced all of the home's incandescent lightbulbs with compact fluorescent ones, which use much less energy [source: GreenovationTV]. These are all steps that nearly any environmentally (and cost-) conscious home restorer in America could apply to make an old home more efficient and cheaper to heat, cool and light.

But what else makes this new-old home so eco-friendly? Read on to find out.

To achieve their net-zero goal, the Grocoffs smartly combined a number of small steps to produce big energy savings. Their plumbing fixtures use much less water than traditional ones, saving both water and water heating costs. They added motion sensors in each room that automatically turn off the lights if they're left on. And by switching to energy-efficient appliances, they were able to reduce their energy consumption even further [source: GreenovationTV].

But the steps that pushed the Grocoffs' home beyond even modern green homes involved more substantial work. The couple drilled three 150-foot (46-meter) wells in their yard to provide geothermal heat, which substantially lowered their already-reduced heating costs. The couple then installed a solar panel array on their roof. Thanks to smart site placement and a commitment to this technology, they're now able to produce as much energy as they need. In some months, they're even able to sell excess electricity back to the power company, which in effect makes their net-zero home a net-negative home [source: GreenovationTV].

The Grocoffs, who track their home's evolution on their GreenovationTV blog, report that theirs is not only the nation's oldest net-zero home, but it's also the first net-zero house in Michigan and one of the first net-zero restorations ever documented. The couple tracks their energy consumption online, allowing them to see when their system is producing optimal power and identify options for boosting their efficiency even further. As of early 2011, the couple reported producing nearly 12,500 kilowatt-hours (kWh) of electricity over a 12-month span, while consuming roughly 10,000 kWh [source: GreenovationTV]. By that standard, theirs is the oldest green home in America. It's reasonable to suspect, however, that their blog could inspire other American homeowners to fix up -- and make green -- even older homes.

Ready to green your home? Check out the links on the next page for some tips.