What's the best way for apartment-dwellers to compost? 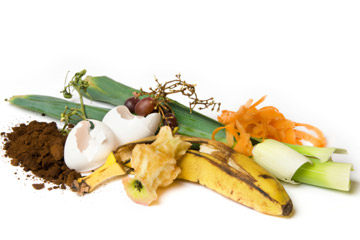 You don't have to have your own land to compost. See more green living pictures.
iStockphoto/Thinkstock

You're convinced that composting works wonders for lawns and gardens. You're also aware of its role in reducing air pollution and extending the life of landfills. But as an apartment-dweller, you've dismissed it as unworkable. But is it really?

Even without the space afforded by a yard, apartment dwellers can enjoy the benefits of composting. There are a couple of options: container composting on the balcony and inside composting with worms, called vermicomposting.

Container composting in an apartment is the same as doing it in your back yard, only on a smaller scale. A plastic box, attractive ceramic barrel or countertop container will work for your bin. It's important that it have air holes and a lid to keep rodents out. You'll also want it to be small enough to maneuver easily.

Start your bin with brown, carbon-rich materials such as leaves, newspaper or potting soil. When you add green, nitrogen-rich food scraps, bury them, and stir things up every couple of weeks to aerate. Be sure to moisten your bin now and then so everything breaks down.

Composting with worms requires a little more time and attention. Buy a commercial worm condo, or make your own using a shallow container with a lid. Punch holes in the top and sides to provide air circulation and drainage. Start with a comfortable bed to keep your wiggly friends happy and productive. Damp bedding helps worms breathe, keeps them cool and provides fiber for them to eat. Leaves and potting soil mixed with moistened 1-inch (2.54-centimeter) strips of black and white newspaper works. Avoid magazines because colored inks can have toxins.

Burrowing night crawlers and garden worms aren't content to live in a box, so use only Eisenia fetida, more commonly known as red worms. You can buy them from garden centers or through commercial growers. Two pounds (907 grams) of worms, about 2000 of the little critters, should be able to process about a pound (about 450 grams) of food scraps a day. They enjoy a varied diet of fruit, vegetables, eggshells and coffee grounds, but not meat, fish, dairy or citrus. Small pieces are easier for worms to handle so chop things up.

Lay the worms on top and leave the lid off. Worms are sensitive to light and they'll head underground where you want them. Worms thrive in temperatures between 55 and 80 degrees Fahrenheit (13 and 27 degrees Celsius). These slimy guys will produce rich, dark worm castings, or vermicompost, in two to three months.