5 Tools That Are a Must for a Builder's Toolbox

by Jonathan Strickland
Prev NEXT
3 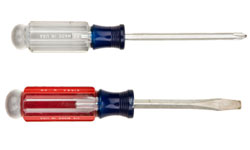 Screwdrivers are essential tools. The two most common types are the Philips (top) and flathead screwdriver.
manley620/iStockphoto

­The screw is one of the six basic types of simple machines -- it's an inclined plane wrapped around a cylindrical shaft. The inclined plane -- or threads -- on a screw translate a rotational force known as torque into a forward or backward motion. That means by turning a screw, you can lift a weight. You can also use screws to fasten two objects tog­ether. In general, screws are better at holding objects together than nails. They're typically easier to remove than nails, too.

Using a manual screwdriver often takes a lot of time and effort. Several tool manufacturers offer electric screwdrivers, and most power drills have special bits designed to fit screws. Either way, no toolbox is complete without at least one screwdriver.