The Science Behind Fluid Concrete 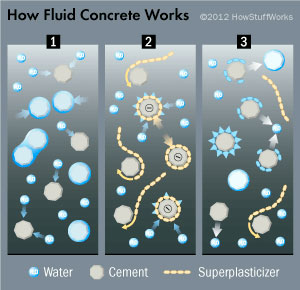 If you think about it, fluid concrete is pretty amazing (yes, we just said that concrete is amazing). It appears wetter and soupier than standard concrete, even though it has the same amount of water in it. How's this possible? Give a round of applause to a surprisingly simple principle you probably learned about in science class -- electromagnetism.

To understand how fluid concrete works, you have to understand how superplasticizers work, since this chemical additive is essentially what differentiates fluid concrete from its standard counterpart. Superplasticizers are made from either sodium salts or calcium salts and are classified in one of four ways: sulfonated melamine-formaldehyde condensates, sulfonated naphthalene-formaldehyde condensates, modified lignosulfonates, and others such as sulfonic-acid esters and carbohydrate esters. Those terms are definitely a mouthful, but the way they work is pretty simple. When concrete is first mixed, the presence of water causes cement particles to be drawn to one another, which thickens the batch. Superplasticizer molecules, which are made of long chains and links, attach themselves to the cement particles and give them a highly negative charge. As a result, they repel each other, the same way that the negative pole of one magnet will push against the negative pole of another. Because the cement particles are no longer attracted to the others, the concrete remains fluid.

Clearly fluid concrete is a pretty magical concoction. But how is it put to work at construction sites?