Using Formwork on a Construction Site 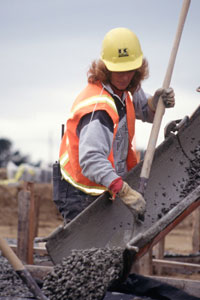 Formwork accounts for roughly 40 to 60 percent of the concrete budget for a given project [source: Lab]. Materials actually comprise a small part of the expense of formwork: Most of the money is spent on the labor to assemble and dismantle forms. Here are the basics of how formwork is used on the job site.

After the contractor and architect-engineer have looked at the structural and architectural drawings of a project and considered the form materials available to them, they'll select a formwork system, which, as mentioned earlier, either arrives in component pieces or already assembled. Once the formwork has been erected, workers must treat the interior of the molds with a release agent -- a compound made from wax, oil or plastic that prevents the form from sticking to the concrete -- because untreated forms can cause the surface of the concrete structure to become discolored or misshapen, which just requires more work to fix it.

Once the form is in place and the concrete mixture is approved, workers begin pouring the concrete into the form's vacant space. (Representatives from the company supplying the concrete are usually on-site during larger commercial projects.) The concrete is distributed by hand or through a hose connected to a concrete truck, with a pump helping the concrete reach portions of the project where the truck can't travel. After the pour, workers often use industrial vibrating devices, which can either attach to the exterior of the form or be placed in the thick of the concrete. Vibration helps consolidate the elements of the concrete and eliminate air pockets. If necessary, the construction works can treat the concrete with water or steam.

After the concrete has dried, the forms are disassembled and removed, or "stripped" in construction parlance. The form can be repositioned in another area of the job site, stockpiled for later use or, if necessary, destroyed. These days, most forms are designed and built to be reused dozens of times.

Effective formwork has to balance several competing interests. Click ahead to find out what they are.