Ahhhh. Breathe deeply. Smells good, right? For some people, the smell of a new coat of paint ranks up there with fresh cut grass and gasoline. Maybe cosmetic companies could distill that scent, package it and sell it as perfume. What would they call it? Eau de carcinogen? Parfum de respiratory problems? 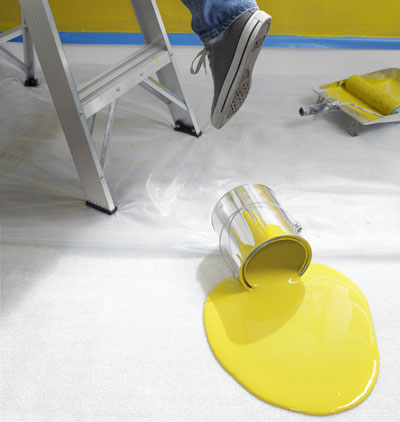 Stephen Swintek/Getty Images
Spilling the paint should be the least of your worries; many paints release high levels of volatile organic compounds that can contribute to a range of health problems.
See pictures of green living.

On second thought, maybe selling it isn't such a good idea. Typical household paint contains up to 10,000 chemicals, of which 300 are known toxins and 150 have been linked to cancer [source: Chadderdon, Grafman]. Some of the most harmful chemicals found in paint are volatile organic compounds, or VOCs. These chemicals aren't something you want to spray on your body or potentially even keep inside your house.

VOCs are unstable, carbon-containing compounds that readily vaporize into the air. When they enter the air, they react with other elements to produce ozone, which causes air pollution and a host of health issues including breathing problems, headache, burning, watery eyes and nausea. Some VOCs also have been linked to cancer, as well as kidney and liver damage [source: Chadderdon].

As paint dries, these harmful VOCs are released into the air at high levels. Indoor VOC levels are routinely 10 times higher than outdoor levels, and up to 1,000 times higher immediately after painting [source: Pennock]. Although VOC levels are highest during and soon after painting, they continue seeping out for several years. In fact, only 50 percent of the VOCs may be released in the first year [source: Green Seal "Proposed"].

So perhaps it's not so hard to believe that paint-related products are one of the worst environmental offenders. They're the second largest source of VOC emissions into the atmosphere after automobiles, responsible for roughly 11 billion pounds every year [source: Pennock, Grafman]. Painters regularly exposed to paint vapors have an increased incidence of several types of cancers, impaired brain function, renal dysfunction and other health problems [source: International Programme on Chemical Safety].

Armed with this information, consumers have begun to demand safer alternatives. Enter low-VOC and no-VOC paints, which are now widely available and sold by most major paint manufacturers.

You may be wondering what took them so long. The answer lies in the composition of paint. VOCs were once considered essential to the paint's performance. Find out more about the makeup of paint on the next page.

Paint Components: Dissecting the Grass Green Paint on Your Walls

As you apply the second or third coat of paint to your do-it-yourself project, you're probably thinking more about how tired you are than about what's in the paint. But the paint's composition actually has a lot to do with how many coats of it you'll need.

Paint is typically made of three major components:

Of these three components, the solvents contribute the most to the paint's level of VOCs. That's because the solvent (a liquid) is designed to evaporate quickly, leaving only the pigment and its binder (the solids) behind on your walls. Paints with a greater percentage of solids typically leave more pigment behind, thus requiring fewer applications. 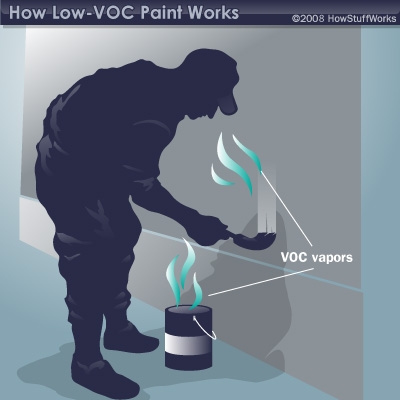 The VOCs in paint rapidly vaporize and enter the air, contributing to ozone pollution and health problems.

Solvents tend to be either oil-based (high VOC content) or water-based (low or no VOC content). Latex paint, which has lower VOC levels and is generally more environmentally friendly than oil-based paints, uses water-based solvents.

Common oil-based solvents include white spirit, formaldehyde and toluene, along with a variety of other alcohols, ketones, acetates and aromatic compounds. Before volatile solvents like these were introduced to painting, oil paints were difficult to apply and rarely used. Now they're being phased out again as environmental and health concerns trump their convenience.

Replacing the oil-based solvent doesn't rid a paint of harmful chemicals entirely, though. Pigments and binders may also contain VOCs, and all three components often contain a range of other toxins. For example, cadmium and chromium -- dangerous metals regulated by the U.S. Environmental Protection Agency -- are sometimes used in pigments. In addition, some paints include toxic materials to prevent mold growth or extend shelf life.

While a low-VOC label on paint indicates only that it's lower in VOCs than traditional paints, some paints eliminate the other toxins as well. Learn more about the low-VOC designation and other environmentally friendly alternatives on the next page.

By this time, you're probably wondering what qualifies paint as low-VOC. According to the U.S. EPA, the numbers break down like this:

Most low-VOC paints sold by reputable dealers, though, tend to have levels of 50 g/L or below. Keep in mind that the numbers cited on the paint can are measurements taken before the paint's pigment or any additives are added, both of which can contribute more VOCs. Pigments, for example, can add roughly 10 g/L [source: Eartheasy].

As you learned on the previous page, just because companies cut back on VOCs doesn't mean these paints are free of toxins. If you're worried about those as well, you still have options. Paints that carry the Green Seal, for example, are guaranteed to meet precise environmental standards. Paints with this designation must have VOC contents below 100g/L for a non-flat finish and 50 g/L for a flat finish. The Green Seal VOC limit for primers and floor paints is also 100 g/L, while reflective wall coatings can't exceed the 50 g/L mark [source: Green Seal]. 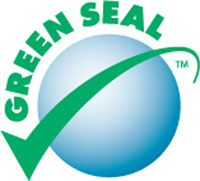 In addition to the lower VOC levels, Green Seal paints are forbidden from using a long list of toxic chemical compounds including carcinogens, reproductive toxins, hazardous air pollutants, heavy metals and formaldehyde-donors to name just a few. As an added draw, paints qualifying for the Green Seal also must meet certain performance requirements such as abrasion resistance, hiding power and washability. Green Seal also offers instruction on how to handle and dispose of paint properly [source: Green Seal].

Beyond low and no-VOC paints, there are also natural paints, which are made primarily of naturally occurring materials like clay, lime, linseed oil and chalk. Since they don't use any synthetic oil products, natural paints are "naturally" low in the VOCs regulated by the EPA for air quality. However, they may contain significant levels of unregulated VOCs from things like citrus oils and terpenes, which can aggravate chemically sensitive people. So just because a paint is labeled natural doesn't mean it's better for your health. Cadmium, for instance, a metal used in some yellow pigments, is highly toxic. Therefore, it's best to always check the ingredients on the label.

Some people seeking low-VOC and otherwise health friendly paints decide to make their own. Milk-based paint is made from a readily available milk protein and contains few, if any, harmful ingredients [source: Pennock]. If you're Martha Stewart, you can also make your own healthy paint out of things like eggs, flour, linseed oil or chalk.

While most low-VOC paints and other earth-friendly paint alternatives perform on-par with regular paints, not all of them do. Depending on what they use as solvent, they may not do as good a job at thinning out the paint, thus making them more difficult to apply. Some alternate solvents also take longer to dry (since they're not so "volatile"), so you'll have to wait longer between applying coats. Another drawback is that there are fewer color options because many of the darker pigments use VOCs. Finally, while low-VOC paints usually cost the same as other paints, many natural paints may cost 20 to 80 percent more [source: Pennock].

Beyond considering levels of VOCs and other toxins when you purchase paint, another good piece of advice is to look for one that contains at least 30 percent solids. That way, maybe you won't have to apply that third coat after all. This information is usually found on the paint's label or Technical Data Sheet.

To brush up on paint and pollution, immerse yourself in the links on the following page.