The Question of Water 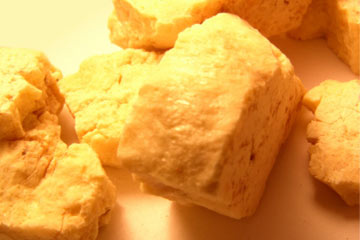 Heated sulfur may be a better option than water as a lunarcrete component.
©iStockphoto/Thinkstock

While the moon has both water and ice, it's also possible to create water by getting hydrogen from the soil and combining it with oxygen. Voila! Lunarcrete solvent. But not so fast. Some of the most exciting (and seemingly bizarre) approaches to lunarcrete composition propose using solvents other than water -- some of which would even perform better on the moon than they would here, which is what makes them such interesting discoveries.

A project in 2008 -- cooperatively developed by the University of Alabama's Houssam Toutanji and Richard Grugel, from the Marshall Space Flight Center -- showed that by combining a lunarcrete mixture with silica, you could use heated sulfur as a binding agent [source: Grugel and Toutanji]. We use water because of its evaporative and molecular properties, and Toutanji and Grugel found that cooling sulfur worked to bind the lunarcrete in a similar way.

It's important to explore alternative solvent avenues because in the vacuum of space, the water would just evaporate and wouldn't bind the mixture at all. Some teams are developing new ways of injecting water into the recipe -- with steam, for example -- while others are working on ways to blend the mixture under pressure.