by Christopher Hassiotis Jun 22, 2018
Cinder blocks await their final destination at a construction site. The process of making concrete creates a whole lot of carbon dioxide, but one company wants to change that by trapping and injecting CO2 emissions into the concrete itself. Copyright Dan Reynolds Photography/Moment/Getty Images

What's the most abundant man-made material in the world? Spend too much time scrolling through posts on social media, and you might think it was something like cupcakes, avocado toast or hot takes on the latest "Star Wars" movie. But look down. Look around. Chances are you're not too far from concrete, and from the answer to that question.

Composed of sand and gravel bound together with cement and water, concrete is an essential part of modern civilization. Humans have found construction applications for concrete for thousands of years, dating back to ancient Rome. Concrete is "the single most widely used material in the world," according to the Royal Society of Chemistry, "and it has a carbon footprint to match." In fact, the society notes that making concrete is responsible for between 5 and 7 percent of all annual anthropogenic global carbon dioxide production. (Anthropogenic refers to humankind's ability to affect nature.)

But what if there were a way to mitigate the negative environmental impact of all that concrete? That's precisely the goal of the Canadian firm CarbonCure. Founded in 2007, the company has developed a system that traps CO2 emissions and injects them into concrete during the mixing process, transforming the CO2 into a mineral form and also minimizing the amount of cement necessary to make concrete. That last part is big when it comes to reducing the overall footprint of concrete.

"The best thing about it is the mineral itself improves the compressive strength of the concrete," Christie Gamble, CarbonCure's director of sustainability, recently told CNN. "Because the CO2 actually helps to make the concrete stronger, concrete producers can still make concrete as strong as they need to but use less cement in the process."

Concrete created with CarbonCure is just starting to make its way into the world in a serious way. For instance, a mixed-use development in Atlanta, Georgia (located near HowStuffWorks world headquarters!) planned at 360,000 square feet (33,500 square meters) will use CarbonCure concrete to save 1.5 million pounds (680,000 kilograms) of CO2 from being released into the air.

As for the future? "This concept of beneficial reuse of CO2 is expected to be a one trillion-dollar industry by the year 2030," said Gamble.

Now That's Interesting
Concrete's for more than just construction. From jewelry to art, humans have gotten crafty with the material. Artist Veijo Rönkkönen spent nearly half a century constructing nearly 500 mysterious concrete figures in a sculpture garden near the Finnish-Russian border. 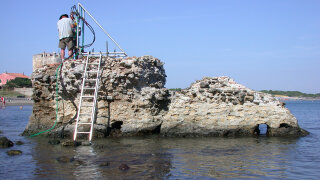 We Finally Know Why Ancient Roman Concrete Outlasts Our Own 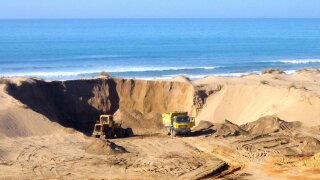 Sand Is in Such High Demand, People Are Stealing Tons of It 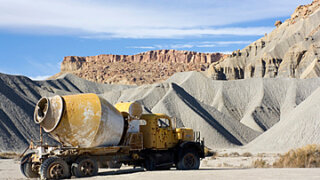