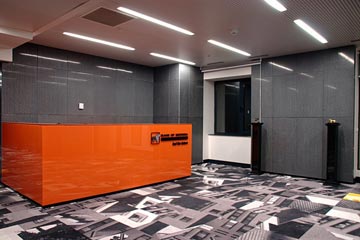 Translucent concrete lines this interior of the Bank of Georgia building in Tbilisi, Georgia. Though the lights are off, the room still appears luminous. See more home construction pictures.
LUCEM

No sun will shine in my day today;

The high yellow moon won't come out to play:

I said darkness has covered my light,

And has changed my day into night, yeah

Slum life, political strife, an absentee father; there's little that could keep reggae superstar and eternal optimist Bob Marley down. That is, of course, except for a lack of sunlight. While Marley's short stint as a factory worker yielded this gloomy look at life surrounded by concrete, the traditionally dim building blocks are getting a makeover designed to finally let some light shine in.

Translucent concrete isn't exactly "see-through," but the new building material draws on optical fibers to transmit light through it while retaining the density that has literally made concrete the cornerstone of buildings around the world [source: Litracon].

The fiber strands, which attract and transmit both natural and artificial light, make up about 5 percent of a translucent concrete block's surface volume. The fibers are mixed with traditional concrete components -- water, sand and cement -- and are distributed evenly throughout the surface. Through the resulting translucent panels, a viewer can clearly see the outline of an object on the opposite side of the concrete. Despite this clarity, however, translucent concrete retains its stout, crack resistant, load-bearing quality [sources: Kim, Portland Cement Association]

The light transmitting material is largely believed to have been invented by Hungarian architect Aron Losonczi, who began developing pre-fabricated translucent concrete blocks he called LiTraCon (light transmitting concrete) in 2004, just three years after graduating from Budapest's Technical University. Here, the manufacturer hand-molds large pieces of concrete, embedding thousands of strands of optic fiber in the material at the same time. The concrete is then cut into individual blocks (the smallest are about 48 x 14 inches, or 1.22 x .35 meters). The parallel fiber strands create two distinct grain-type surfaces: one bright and the other dark [sources: Litracon, Graydon, Hanlon].

Now you know what translucent concrete is, but how -- exactly -- is it used? Read on to find out.

How is Translucent Concrete Used? 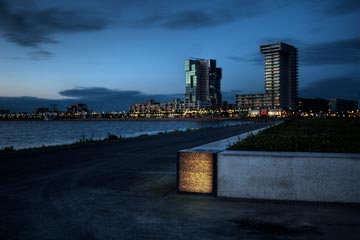 Another example of translucent concrete.
LUCEM

Drab, dull and depressing, concrete has long been associated with penitentiary-like office buildings, ugly patios and unfinished basements. With its light-transmitting properties, however, translucent concrete has the power to potentially transform the interior of concrete buildings, making them appear fresh, open and spacious. While the glass and plastic fibers imbedded in the material make it cost-prohibitive in many large-scale construction projects, LiTraCon and other types of light transmitting concrete are finding their way into a smattering of structures around the globe [sources: Inventables, Hanlon].

Since its development, translucent concrete has been used to create partition walls, stairs, decorative tiles and even lamps. One of LiTraCon's first public uses, for example, was in a public square in Stockholm, Sweden. By day, the square's sidewalk looks as though it were made of ordinary concrete, but the translucent surface lights up at night when the colored lights beneath the surface illuminate [sources: Inventables, Portland Cement Association]. Meanwhile over in eastern Europe, the newly renovated Bank of Georgia headquarters building features almost 300 square meters (3,229 square feet) of translucent concrete made by German manufacturer LUCEM, including LED-lit wall panels [sources: Lucem, Kim].

While translucent concrete is one of the most interesting new takes on the historically stiff and uninspiring building material, it's not the only one. In 2005, Michigan's Department of Transportation used "bendable" concrete to retrofit a bridge in Ypsilanti. Featuring coated fibers that slide within the cement, this reinforced building material is 500 times more resistant to cracks and about 40 percent lighter than traditional concrete. At the same time, manufacturers have also developed "self-reinforcing" concrete, which draws on steel fibers to make the material more resistant to cracks and bridge those that occur [sources: Hanlon, Rao].

Concrete: It bends, fixes its own breaks and now it even lets some light in. Check out the links on the next page for more information on concrete, how it works and how it can be used.

It's no small miracle that in my 30-plus years on this planet I've yet to walk into a closed glass or screen door. I am, according to many who know me, a "dreamer." Or, according to some of the women I've dated, "aloof." Either way, I'm often lost in my own thoughts, whether it be walking down the street without a clue of my original destination or at a candle-lit dinner vaguely suspecting that the person across from me just said something deep and compelling, but having not the faintest idea as to what it was. So while I enjoy a hearty laugh at any unsuspecting dufus who -- so excited about being the first person to the barbecue -- doesn't realize that semi-transparent door in front of him is closed before walking into it, I also realize that it is only a matter of time until I am that dufus. Now that we have translucent concrete to look forward to, my oblivion may be a bit more painful.