10 Responsibilities of a Construction Project Manager

by Chris Opfer
Prev NEXT
9 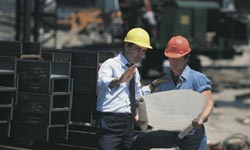 Who's out of line today? The PM has to be on the case.
Comstock/Thinkstock

On a construction site, the PM is the boss.

The construction project manager is not only responsible for planning the work and making sure it gets done, but also supervising the hard hats who do it. That means coordinating and directing the efforts of construction workers. It also means hiring, disciplining and perhaps even firing those who step out of line (or those who, like Vito Spatafore in "The Sopranos," spend more time sipping coffee, thumbing through a newspaper and doing unexpected things in the port-o-john than lifting a hammer) [source: Exforsys].

In other words, it's the PM's job to get the work done through other people. In this and in many other ways, the PM is no different than a manager in any other job field, whether it's the globe-trotting Ringling Bros. Circus or a paper clip sales outfit in Sheboygan, WI.