The Cultural Legacy of Shotgun Houses 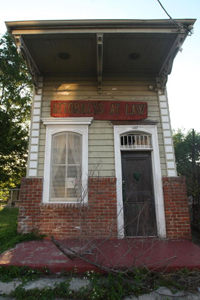 Because of their cultural legacy, many shotgun houses -- like this one in New Orleans -- are being preserved and protected.
Mario Tama/Getty Images

In a society that often places a higher value on conspicuous consumption than it does on the dignity of simplicity, it's easy to simplify the impact of the shotgun house on the African-American experience. Shotgun houses were spare and built close together. Their embellishments were modeled after those found on the Victorian homes of wealthier whites, usually located elsewhere in town.

But the very nature and design of these homes helped to strengthen the African-American community in the U.S. Because of their close proximity and porches, shotgun houses helped give rise to tight-knit neighborhoods. The shotgun house -- modest, constructed close to other homes, imported from the Caribbean and Africa -- has become somewhat emblematic of the African-American experience. Writes historian Denise Andrews: "The shotgun house represents the slaves' reaction to adversity, making sense of their new environment by modifying familiar living patterns. Cultural contact did not necessitate massive change in architecture; but rather an intelligent modification of culture" [source: Andrews].

The influence of the shotgun house would soon extend beyond the African-American community. By the beginning of the 20th century, shotgun house building kits were available on the market for $100. The structures soon began to appear in cities across the United States. Because of their simple design, shotgun houses could be erected quickly, which soon made them a common sight in the boom towns of the West. They also served as temporary (and sometimes permanent) housing following natural disasters. For example, in the days and weeks following the massive earthquake that struck San Francisco in 1906, hundreds of shotgun house kits arrived and were constructed as housing for displaced residents [source: Kislak Foundation].

New construction of shotgun houses waned in the 1920s, but many of the original structures still remain -- and are still inhabited. Others have been adopted and restored by preservation societies to serve as reminders of the role they served, not just in the African-American community, but in the U.S. as a whole.