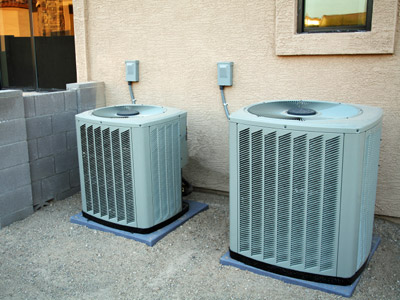 Air conditioners are energy hogs, so if you want to go green, go off peak.
vlynder/iStockphoto.com

Green energy is a big topic these days, and the list of ways to generate and manage energy more efficiently keeps growing. One innovative way to use energy wisely is through the use of off-peak cooling systems. Off-peak cooling is pretty ingenious because it uses energy at night when the demand is low. Air conditioning is an energy hog, and when some of the electricity needed to cool all that air is distributed over the evening and night hours, it takes some of the burden off the energy grid at the biggest demand times of the day.

This redistributes the demand for electricity, helping to avoid brownouts and blackouts and also takes advantage of lower electricity rates during off-peak times. There are other benefits to off-peak cooling systems, too. Conventional air conditioners use more energy as they get hotter, and the more energy they draw, the less efficiently they use it. Off-peak cooling systems don't only shift the demand for power to a different time of day, they create a more stable cooling environment that can deliver the same cooling capacity with less energy consumption.

Utility companies have to meet the demand for energy during peak periods in whatever way they can. They bring less efficient, dirtier plants on line if they need them and buy energy from other power plants on the grid at premium prices, passing those charges along to their customers. They also expand their facilities when they can't meet current or projected demand. Making the energy grid more efficient by distributing the demand for electricity and reducing energy consumption by running air conditioning at optimal performance reduces greenhouse gas emissions and forestalls the need for more energy plants to handle the load. This is good news for the environment and helps keep the cost of energy under control [source: Katz].

On the next page, we'll take a look at how off-peak cooling systems can work at night and still cool the air during the hottest part of the day.

As the building starts to warm up during the day, the air-conditioning kicks on, and the chilled refrigerant from the off-peak cooling system keeps the building's air cool. The glycol cycles through the ice filled tanks periodically to cool back down after being exposed to the hot air, and eventually, this exchange of hot for cold melts the ice. In the evening, the system charges again, freezing the melted ice with a chiller, and preparing the system for the next hot day.

This is an example of a simple off-peak cooling arrangement. More complex systems can use other forms of refrigerant for cooling or use different design strategies for storing ice. Some systems only use off-peak storage for part of their overall demand, supplying some of their cooling requirements from chillers running during peak energy hours. Although these partial systems have higher operating costs, the capital investment is lower because the chillers can be sized smaller, making the equipment itself less expensive.

Off-peak cooling, or thermal energy storage (TES), has typically been used in large buildings, like office complexes, hospitals or schools. Older TES systems needed large tanks and were hard and expensive to retrofit for existing construction or residential applications. Nowadays, smaller, more cost-effective systems are being developed for residential use, and large installations can place tanks almost anywhere, from buried underground to inside the building itself.

In the next section, we'll explore some of the components of off-peak cooling systems and how they relate to residential applications.

Off-Peak Cooling Systems For Light Commercial and Residential Use

New designs for off-peak cooling systems are being developed all the time. Whereas large-scale units use large, insulated, polyethylene tanks, a chiller and dedicated distribution system to cool and circulate indoor air, now, there are also smaller styles and configurations that will make off-peak cooling possible for small scale applications like light manufacturing, commercial and residential use.

The size of the system required to cool a specific building will depend on the area to be cooled. Air-conditioning volume is sized in tons, and it takes one ton (0.9 metric tons) to cool 12,000 BTUs (3.5 kilowatts) in an hour. If you're confused, that translates to about 500 square feet (46.45 square meters) of space [source: ACU Air].

The Ice Bear 50 system by Ice Energy is designed for small commercial or large residential applications. It's a roof or split-system compatible unit that will work with an air-conditioning system's existing ductwork to cool up to 30-ton hours at a maximum load of 5 tons (4,536 kilograms). According to Ice Energy, integrating the Ice Bear, which uses a conventional HVAC system during off-peak hours, with your existing system can reduce peak energy demand up to 95 percent from its first day of use. The Ice Bear can cost anywhere from $4,000 and $18,000 depending on the air conditioner involved and the specifics of the installation [source: Ice Energy]

IceCycle also manufacturers a unit designed for retrofits called the IceCycle Retro and, like the Ice Bear, it works on roof and split-system installations using the existing setup for the conversion from conventional air conditioning to off-peak cooling.

Industry leader CALMAC, who has made off-peak systems available to companies like IBM, American Airlines, McDonald's, Kohl's, DuPont, Marriott Hotels and JC Penney, is getting into some large residential installations, too, with its ICE-BANK model 1045 C tank, which is rated for 45-ton hours of cooling [source: Miller].

In the next section, we'll take a look at what the future holds for off-peak cooling.

Who Invented the Air Conditioner?

In 1902, to solve a problem with smudged pages at a printing plant, Willis Carrier invented an air-conditioning system that would remove humidity and reduce heat. The air conditioner was born. The Weathermaker, the first home air conditioner, was introduced a few years later in 1928.

The Future of Off-peak Cooling

As long as power companies are offering incentives for using power during off-peak hours, the future of off-peak cooling looks bright. Not only that, there also are disincentives for businesses that use power during peak times in the form of time-of-use tariffs and demand charges imposed by the power companies in places like Southern California and other energy strapped locations. On the flip side, some of these same utilities are offering very attractive incentives to convert equipment that uses off-peak energy, including footing the bill for the cost of the equipment and offering energy discounts [source: Du Bois].

On the residential front, a number of power companies already provide time-of-use pricing for residential customers, and this trend is likely to continue as power demands grow. Effective Jan. 1, 2010, the R22 coolant you probably use in your current air-conditioning system will be phased out in favor of R410A, a more eco-friendly alternative. If your air conditioner's evaporator or condenser needs service, you'll have to make a possibly costly conversion, which might be a good time to start considering some off-peak alternatives to your air-conditioning needs [source: ACU Air].

On the next page, you'll find more articles that will explain green energy practices and lots more interesting information.

Using a U.S. Department of Energy grant, Richard Bourn developed a roof-mounted system using water, spray-cooled by the night air, to cool the building during the hottest part of the day. Tested on flat and low-sloped roofs, a couple of different installation types were used. An analysis of five of these systems showed a reduction in peak cooling demand of between 50 and 90 percent. It was also projected that a NightSky type system could double a roof's effective life. The NightSky project is just one example of how creative energy conservation is changing the way we define our need for power [source: Night Sky].