How to Install Carpeting

Installing wall-to-wall carpeting takes preparation and care, but it doesn't take much special skill. This article will take you through the basics of what you need to know to install carpet in the room of your choice -- from gathering materials, to measuring and preparing, to putting the padding and carpet in place. Very large rooms require power stretchers, so leave those to the professionals, but the rest of the house is yours. 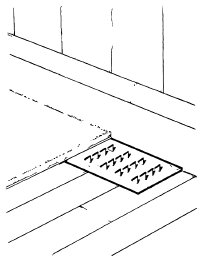 Nail fastening strips along the edge of the floor.

Probably the most difficult part of installing carpeting is calculating exactly what to buy and how to place it. Carpeting is sold in 9-foot, 12-foot, and 15-foot widths; padding is sold in standard 4 1/2-foot rolls. Before you buy, measure the room to be carpeted and draw a floor plan on graph paper -- make sure your measurements are exact. Mark the exact position and width of all doors, windows, fireplaces, radiators, and other wall interruptions, and include the full depth of door frames. Take this floor plan with you to the carpet dealer.

The dealer should also determine the amount and type of tackless strip fastener you need. The fastener comes in 4-foot strips. The type depends on the thickness of your carpet and the floor you're covering; the strips have preset edge tacks and preset nails for installation over wood or concrete. Be sure to buy the right kind, and buy a strip or two extra to allow for mistakes. Have metal door edging strips cut to the exact measure of your doors.

Finally, rent a knee kicker from the carpet dealer. The kicker is used to stretch the edges of the carpet onto the fastening strips.

Before installing the carpeting, prepare the floor. Move all furniture out of the room and remove doors that open into the room. Pound in any loose nails and reset squeaky floorboards with flooring nails, using a nail set to drive the heads below the floor surface. Condensation can be a problem when resilient flooring is carpeted; if the floor is covered with resilient tile or sheet flooring, remove the old flooring and then prepare the subfloor.

To complete preparations for the carpet installation, remove floor register covers and, if you want it to cover the carpeting, quarter-round baseboard molding. Fill in any wide cracks in the floor with wood putty, smoothed over with a putty knife, and let the patches dry completely. Vacuum the room thoroughly before you start.

The first step is nailing down the fastening strips. Starting at a corner, nail strips along the edge of the floor, 1/4 inch from the wall, with their teeth pointing toward the wall; use a tack hammer to drive the preset nails through the strips and into the floor. Wear work gloves to protect your hands. To make sure the strips are nailed evenly and to maintain the 1/4-inch gap, slide a 1/4-inch-thick piece of scrap wood, on edge, between the strip and the wall as you nail each fastener into place. Work around the room, sliding this guide board along the wall as you nail the fastener strips into place.

To work around corners, cut fastener strips to fit with a small handsaw. Nail strips in front of radiators unless there's enough clearance under them to admit the knee kicker with room to spare -- there usually isn't. Set strips closely around open floor registers. Nail a metal door edging strip across the floor in each doorway, with the open rim pointing into the room and teeth pointing out. The rim should line up exactly under the edge of the door when both carpet and door are in place.

Now that you've prepared the floor, the next page will show you how to put the padding and carpet in place. 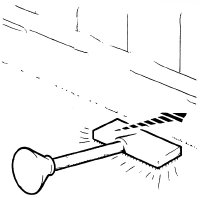 Strike the knee kicker to place the carpeting.

When all the fastener strips have been nailed into place, you are ready to start installing the carpet. Take the rolled-up carpeting and pull it into position in the room. Then unroll it, right over the bare floor. This is so you won't jerk the padding out of place later by pulling the carpeting across it. Roll the carpeting back from one side toward the center of the room, exposing the floor again.

Unroll a strip of foam padding along the edge of the floor across the bare side of the room from wall to wall, waffle-patterned side up. Cut the strip carefully with heavy scissors, leaving about 2 inches overlapping the fastening strips at each end. Pull the strip to position it over the bare end of the floor so that it overlaps the fastening strips on both ends and along the wall. Then staple it into place, using a staple gun to set staples diagonally every 6 inches or so along all four edges of the padding.

Cover the rest of the room the same way, rolling the carpeting back so you can roll the padding into place. Butt the edges of the strips of padding and staple every 6 inches along every edge. Trim the padding as necessary to fit around obstacles, cutting as closely as possible around them.

On concrete floors, use carpet padding adhesive to anchor the foam padding. Position the padding as described previously and roll it back from one side, then spread adhesive on the exposed floor as directed, using a paintbrush or a fine-toothed notched trowel. Roll the padding out onto the adhesive, pressing and smoothing it into place. To complete the gluing, roll the padding back from the other wall, apply the adhesive, and unroll the padding. Repeat, butting the strips of padding, until the entire floor is padded. Fill in under radiators with small pieces of padding.

Finally, unroll the carpeting over the padding and pull it carefully into position, overlapping the fastening strips all around the room. Slit the folded-up carpeting vertically where it goes around corners, being careful not to cut past the overlap into the main carpet, so that the edges lie flat against both corner walls. Make straight cuts and crosscuts to fit the carpeting around radiators and other obstructions; don't cut holes in the carpet to accommodate them. Trim carefully around open floor registers, leaving a slight overlap.

After kicking the first corner of the room into place, fasten the two adjacent corners the same way, leaving the diagonally opposite corner loose. Then work from your starting corner out along the two walls of the corner, holding the just-fastened carpeting in place with one hand and using the other to kick the next few inches of carpeting. Make sure the carpeting lies flat and doesn't shift as you work. Fasten the third side of the carpet, working toward the loose corner, and then fasten the fourth side.

Use a utility knife with a sharp heavy-duty blade to trim the edges of the carpeting, and replace the blade as soon as it begins to dull. Cut off the turned-up edge of carpeting evenly, leaving about 3/8 inch still sticking up above the tacked-down edge. Cut carefully, and snip off any ragged tufts of yarn.

Finally, replace floor registers -- you may have to trim the carpet edge back farther, but cut carefully. Replace quarter-round baseboard molding if you removed it earlier, and rehang the doors. If the new carpeting and padding are much thicker than the old floor covering, you'll probably have to plane the bottom edge of each door so it can open and close easily. Remove the door from its hinges and plane the bottom edge carefully, planing from both ends toward the center. Rehang the door. Move the furniture back into the room. Enjoy your new carpet!