10 Things Your Plumber Doesn't Want You to Know 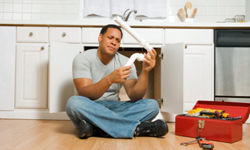 Before he touches your pipes, make sure he knows what he's doing.
Comstock/Thinkstock

There are some things around the house that your average homeowner can attempt to fix herself. Replacing a light switch, shoring up a loose piece of molding, fixing a broken floor tile -- these are all pretty basic things you might find on a honey-do list.

When it comes to plumbing, however, it's a different story. Water always finds a way out, so even the smallest mistake in a DIY plumbing repair can end in disaster. That means that when something is awry with your pipes, you need to call in a professional. When it comes to hiring a plumber and getting through a job, here are 10 things your plumber may not want you to know.

The Assistant is Coming

Many times, when a plumber books a job, it's with the best intentions that he's going to do the work himself. After all, it's his name on the side of the truck. But sometimes, plumbers book more jobs than they can handle and dole out the work to their assistants. While you may think your repair should get first dibs, if the plumber is overbooked, then he'll prioritize his work based on how complicated each job is. That means if you have a minor repair, you may get the assistant for your job instead of the guy you talked to on the phone.

After World War II, more people left a rural existence for city life. This urbanization created a need for more central water supplies, making it much easier for homeowners who had previously relied on their individual wells.

Some plumbers might be forthright when it comes to offering advice for preventive care. Others may not want you to know that your current repair, which is helping to pay your plumber's bills, is something you may have been able to prevent. Technically, the plumber's job is to fix a problem, not offer you advice on how you can help make him obsolete. But there are many plumbing issues that you can avoid with preventive care and you're likely only going to find this kind of advice online. If you have a plumbing repair you need done, take some time to look up the issue online and see if you can save yourself some money down the road by taking some early measures to avoid it.

You may be in trouble if the plumber you thought you just called is really a handyman in disguise. Sometimes a handyman can do a great job with your plumbing needs, and sometimes he can't. Either way, you're going to be stuck with the bill.

A licensed plumber will be acquainted with local building codes and regulations. In many states, he'll also have completed a certain amount of hours on the job, so you know you're getting some experience. Finally, a licensed plumber is fully insured in case something goes wrong or somebody is injured on the job.

In the United States, the irrigation of crops accounts for a third of all water use and uses more fresh water than any other source.

You Could Have Fixed it Yourself 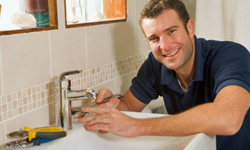 He's smiling because he made so much money on such an easy fix!
iStockphoto/Thinkstock

If there's one thing you're not likely to hear come from the mouth of someone you just hired to complete a repair is that you could have done it yourself. Most repair people aren't in the business of letting customers know that a pro wasn't really needed. In fact, a lot of the repair jobs that a plumber performs might be possible for someone with some decent renovation skills. Chances are you'll never know if this is the case, though, until you give it a whirl yourself. Unfortunately, this isn't a very good position to be in because you could end up costing yourself more money than you would have to begin with. In the end, you can always ask your plumber if it was a repair you could have handled, but it's not likely you'll get a straight answer until you've written the check.

You're In Charge of Cleanup

The problem with plumbing is that the pipes aren't typically above the floor where the plumber can easily access everything. Sometimes, there needs to be some demolition work done in order to get the job completed. Unless you've had a specific conversation with your plumber about who's responsible for this kind of mess, you're going to have to fix it yourself. Like we've said before, a plumber's job is to repair your water problem, not to rebuild the wall he was forced to take down in order to do it. Initiate this kind of conversation early so you can plan for any additional workers to be on the scene once the plumbing is in order.

In 1955, only 62 percent of the population got its drinking water from a public source, but by 2000, that number increased to 85 percent.

He Doesn't Have the Right Part

If you have a plumbing repair you need tackled, then you want it finished as soon as possible. This is especially true if it involves the toilet or any other part of the sewage situation at your house. The last thing you want to hear from your plumber is that he's going to have to wait a week or more for a specific part to become available. You'd think that with a plumbing truck full of parts this would never be the case, but it is. Let's say your house has been renovated, but still has some of that 90-year-old plumbing under the house. This could present a parts problem, or it may lead to a larger repair than you anticipated. Either way, this is the kind of conversation your plumber knows you won't enjoy having.

Most Things are Movable

There are many things that a plumber might find complicated, but very few that simply can't be done. The whims of homeowners are many, and sometimes they may want a sink, shower or toilet to be in another place.

If you've been working with the plumber for a while on a renovation, he may not be so speedy to offer up a solution that satisfies you if it makes life more difficult for him. Even though you're paying for it, sometimes it's more cost-effective for him to simply move on to the next job. If your plumber tells you your sink, toilet, or shower can't be moved, ask for a detailed explanation and see if you can't come up with a solution.

With the threat of drought conditions always present, there are lots of things individual homeowners can do to conserve water. Water your lawn three to five times a week instead of every day. Don't run the dishwasher or washing machine until it's full. And if you cover your swimming pool, you'll reduce evaporation by 90 percent.

Your Husband Botched the Job 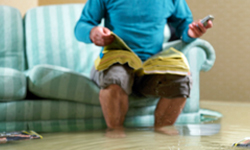 Your plumber secretly loves that your husband screwed it up this badly.
Digital Vision/Thinkstock

A plumber's job is not to come over to your house and embarrass someone who has tried to fix a job himself. Chances are, if you've tried and failed to fix something yourself, the plumber will just come in and quietly take care of the problem. He may chuckle behind your back when you leave the room and regale his plumber buddies with your mistakes over beers at happy hour, but he's really secretly happy you made a real mess of things. He's hoping you can be a constant source of work for him when you continue to screw up your own plumbing jobs.

You Have a Choice with Parts

A lot of times, a plumber has a choice on what kind of parts to use on a job. In some cases, the plumber might opt for the less expensive version, like maybe PVC pipe instead of copper. While this ultimately means a cost-cutting measure for you, it might not be the right move in the long run. If you want top-quality parts and you won't balk at the bill, then you should request a discussion when it comes time to order them. It's not so different from dealing with an auto mechanic. Sometimes cheaper parts make the job easier and more profitable for the repairman, but it's your own interests that matter most.

A dripping faucet can waste around 2,000 gallons of water per year. And leaky toilets will cost you about 200 gallons a day.

A Running Toilet Should Cost You $5

You know those toilets that run and run until you jiggle the handle a little bit? Well, there are usually only a couple of things wrong in that case and neither should cost you more than five bucks to fix. The easiest scenario is that your toilet handle is sticking. This is all just a matter of spraying a little lubricant where the handle meets the porcelain. The other option is perhaps a flap valve in the toilet tank that needs replacing. This is something that shouldn't cost more than $5, and even a novice DIYer should be able to do it. Before you call the plumber, who will probably charge you a hundred bucks just to pull into your driveway, see if you can fix that running toilet yourself.

Pressure washing can be done by the amateur homeowner or the experienced professional. HowStuffWorks looks at the ins and outs or power washing.