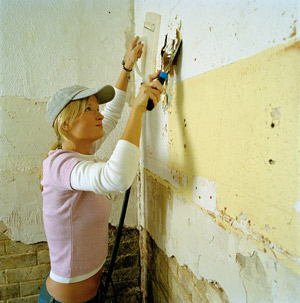 Wallpaper removal isn't fun, but you can whip up a little something at home that can make the job easier. See more home construction pictures.
Chris Windsor/Digital Vision/Getty Images

Even if you're a do-it-yourself type who tackles home improvement projects with vim and vigor, you may find yourself putting off tedious projects like wallpaper removal from one New Year's resolution to the next. Have you been meaning to take down that country farm border in your kitchen that you now hate? Maybe the cows and roosters aren't so adorable anymore. Fortunately, removing it can be quite simple.

To determine if wallpaper removal is a project for you or the pros, consider the type of covering you're working with, the length of the project and the costs involved.

There are many kinds of wallpaper and essentially only two kinds of backing: Peel-away and non peel-away. The backing determines your options. To find out which one you have, find a discreet area on the wall and test a small section by gently tearing the wallpaper. If it comes off easily, the paper can be dry-stripped, so go ahead and rip away! Typically, newer coverings and those made with vinyl are easy to take down.

If you aren't so lucky, you need to dissolve the adhesive that's gluing the wallpaper to the wall. You can dissolve it with wallpaper remover, which can take several hours to several days, depending on the backing, room size and any complications that arise. Doing it yourself costs less than hiring a professional -- you only need to pay for tools and materials. However, hiring an expert can cost less if you're dealing with complications, like drywall that wasn't primed.

Turn to the next page to learn how to make your own remover and find out why this inexpensive alternative can be so effective.

There are a handful of ways to get rid of stubborn wallpaper that won't strip away, including homemade and commercial removers.

You can make homemade remover with equal parts water and vinegar or 25 percent liquid laundry softener and 75 percent water. Before you begin, protect your floor by taping a plastic sheet to the baseboards.

Once you get started, tackle one wall at a time. Use a sponge to cover the entire wall with water and repeat twice. Next, apply several coats of the remover to a section measuring about 3 square feet with a sponge, paint roller or liquid sprayer. Wait about 15 minutes and then peel off wallpaper with a scraper. Use a sponge or sponge mop and warm water to remove any remaining residue. Wipe away pasty residue from the wall using warm water and a sponge. Once you've done that, remove the tape from the plastic sheet protecting the floor and fold the corners toward the middle so that wallpaper scraps gather in the center. Discard both the sheet and scraps.

While commercial and homemade removers are made from different ingredients, they work for the same reason. An acid or base in the remover works as a catalyst for a chemical reaction with the water called hydrolysis, which breaks down the adhesive glue.

Wallpaper adhesive is sensitive to both acids and bases, which is why it responds effectively to wallpaper removers that have either an acid or a base as an active ingredient. Both kinds of remover penetrate the wallpaper's top layer, reaching the backing to break down and dissolve the glue.

Think of wallpaper adhesive as a brick wall. It won't topple over if you push against it because mortar holds all the bricks together. Remover breaks down the brick wall (i.e., the glue) by dissolving the mortar in between the bricks. Nothing is holding all the molecules together anymore and the bricks fall apart. The wall is no longer a wall; instead, it's just a pile of bricks (or individual molecules).

Now, let's consider a homemade remover made of vinegar and water. Acetic acid in the vinegar allows hydrolysis to take place. The adhesive that once glued the wallpaper to the wall no longer exists.

Read on to learn more about commercial wallpaper removers.

Commercial removers are typically sold as solvents or gels and are chemically acidic or basic. Active ingredients vary but common ones include sodium hydroxide, enzymes or acetic acid.

Commercial wallpaper remover works the same as homemade remover. An acid or base in the remover acts as a catalyst for hydrolysis -- the process that breaks down the adhesive glue.

Acids donate positively charged subatomic particles called protons, and bases accept these protons. Wallpaper adhesive is acid and base sensitive, which explains why it responds to acidic and basic wallpaper removers. Both kinds of removers work the same way: They get through the wallpaper's top layer and dissolve the glue on the back.

Some commercial products contain an enzyme that catalyzes the breakdown of adhesive without getting consumed in the reaction. In other words, these enzymes speed up the process of hydrolysis. An enzyme is like a lock and a molecule is like a key; in other words, enzymes only target the molecule for which it's made. To extend the brick wall analogy we mentioned on the last page, one enzyme might be created to break down mortar holding together a red brick and brown brick. Another enzyme might be engineered to break down the mortar fusing a black brick and orange brick. Products with enzymes will work faster than removers without them.

Removing wallpaper can be as easy as one, two … rip! Of course, there's no way to learn this until you pull at a loose seam. If a panel comes off right away, the wall was coated with a primer before it was covered. Just keep pulling slowly until you're done. This can take less than an hour or it can take up your entire day, depending on the size of the room. You may need a paper scraper for any patches that don't come off right away and a sponge and bucket of warm water to wipe off any sticky residue. This method is easy, quick and costs you nothing. Unfortunately, wallpaper rarely comes off that easily.

However, simple alternatives abound. Wallpaper steamers can do the job when other methods fail. They're especially effective on tough projects, such as wallpaper that's been wallpapered over or painted. You can rent one for approximately $25 per day or buy one for about $50.

If the wallpaper isn't porous, you can score it by cutting slits with a razor or scoring tool. Here's how you handle the rest:

Wear protective goggles, gloves and a long-sleeved shirt. Try to keep the plate lower than your arm. Otherwise, hot water can drip from the plate and burn you. When the steamer isn't in use, set the hot plate on a cookie sheet or similar surface.

Again, steamers work for the same reason liquid and gel removers work -- they allow hydrolysis to occur. Heat also makes an effective catalyst for hydrolysis and also helps makes liquids more soluble. Wallpaper steamers heat water until steam forms, which is then applied directly to the wallpaper adhesive. The steam breaks down the glue through hydrolysis.

Now that you know several ways to remove wallpaper, stop procrastinating and get started. May that farmyard scene on your kitchen wallpaper motivate you: The cows have come home, and now's the time for action.

A Few Ounces of Prevention

The Wallcoverings Association recommends cleaning and priming walls before covering them with wallpaper. Add two cups of bleach to a gallon of water to scrub away any mold, mildew or stains. Rinse those areas with water and let them dry completely. Use spackle or drywall to fix irregularities. Prime walls with a water-based or oil-based primer that also works as a stain blocker, and don’t forget to use primer on stains and gloss or semi-gloss paint spots after you sand them.