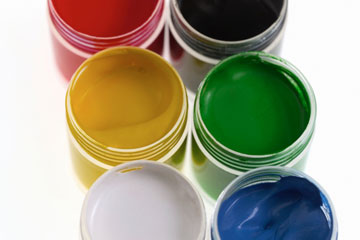 There's more to designing a room's wallcovering than choosing a pretty paint color. Consider these options before you pick up your brush.
Stockbyte/Thinkstock

Red, blue and yellow are known as the primary colors. In color theory, the mixing of these three colors in different proportions creates all other colors.

Colors opposite each other on the color wheel (for example, blue and orange or red and green) are called complementary colors. These are colors of equal intensity that, when combined in equal proportions, make a neutral gray tone. When two complementary colors are placed next to each other, they achieve their maximum intensity and compete for attention.

The first coat of paint used in preparing a wall surface is the primer, which acts as a sealer. Primer will keep stains and old color pigments from bleeding through a new paint treatment.

A chair rail is a piece of molding used to divide a wall surface horizontally. It is placed at the height of a chair back to protect the wall surface from damage. Also known as a dado cap, it is often used to separate or cap two different surface treatments between upper and lower halves of a wall.

This is the lower portion of a wall when treated differently from the surface above. Traditionally, the dado included a baseboard, a middle shaft of sorts and a cap molding. Often paneled or ornamented, it was also known as a low wainscot.

This kind of paper is used to disguise imperfections when a surface is not suitable for hanging wallpaper directly on it. Liner paper comes in several weights, either as uncoated pulp or smooth finish, and creates a clean uniform surface for hanging your finer wallpaper.

Saturated color describes how much pigment is in a paint. The more pigment there is the richer, brighter and stronger the color will be. It is also known as the intensity of a color.

Veneer is a thin sheet of finishing wood that is applied to a coarser, less expensive material. Veneering often allows you to have a fine wood surface without incurring the cost of a solid piece of expensive wood. A thin layer of artificial veneer, laminate is often used on countertops and cabinetry. However, it also works great as a wall surface! Many new laminate styles, including metals, photographic images and wood grains, translate nicely as wallcoverings.

This wooden lining is designed for interior walls. It is often paneled and used on the lower portion of a wall.

This embossed wallpaper has a relief pattern throughout, which can usually be painted. Lincrusta is often used as a dado application on a half-and-half wall or as a border at the ceiling line of a painted or papered wall.