by Kim Williamson
Prev NEXT
10 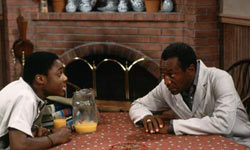 Theo and Cliff share some family time around the uncluttered kitchen table of "The Cosby Show."
Jacques M. Chenet/CORBIS

There was probably not a TV-watching child (or parent) in the 1980s who didn't want to be a Huxtable. Everyone wanted The Cos (aka Cliff) for a dad, lovely Clair for a mother, and a household of well-dressed and well-behaved children.

Cliff, a doctor, and Clair, a lawyer, were high-powered professionals. Children ranged from adorable Rudy to pre-teen Vanessa and teenagers Denise and Theo with random visits from college student daughter Sondra. Extended family routinely dropped by and at one time Denise lived there with her husband Martin and his child.

Yet despite the endless parade of people, parents that put in 10- or 12-hour days, and multiple episodes centered in the kitchen, you never saw so much as a book or plate out of place. Clair, Cliff and the kids never had to pick up a broom or duster; their clothes must have miraculously reproduced because they didn't do laundry. Unlike my children who take out every toy they own, little Rudy played neatly with one doll or game at a time. Backpacks, shoes and coats apparently evaporated each day after school because they weren't thrown in the hallway or by the front door. There was the occasional messy bedroom (Cliff to Theo after looking around his clothes-strewn room: "Hard to get good help around here these days?") But usually that house was spic and span.

Bill Cosby may have written the book on being a father, but it's the invisible chore chart that should have been published.