by Kim Williamson
Prev NEXT
6 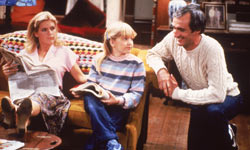 Daughter Jennifer gets some wise parental advice from Elyse and Steven in their comfortable but still neat family room.
Fotos International/Getty Images

Before Michael J. Fox was an icon and ambassador for Parkinson's disease, he was conservative, suit-wearing, Ronald Reagan-loving Alex P. Keaton – a colorful character and oldest son in the Keaton family. This show was one of my personal favorites -- I adored Alex, wanted parents like Elyse and Steven Keaton but would have settled for just living in the household.

In retrospect, who wouldn't want to live there? Their family room, the place where the family members had understanding talks, solved each other's problems and spent "quality time," was impeccable. The kitchen, another popular gathering place, featured healthy food and good conversation, but without the stacks of mail and school books, dishes and lunchboxes that most family kitchens mass produce.

Both Keaton parents had full-time careers, and were a hip, socially enlightened couple, ignoring the stereotypical gender roles of women as homemakers and men as bread winners. Now and then you'd see Elyse at her drafting board doing some "architectural stuff" in the kitchen. But in their world, neither male nor female had to do anything to maintain the household's immaculate appearance.

Even when "Family Ties" "jumped the shark" and expanded their cast with baby brother Andrew, the place didn't get messier. Several months ago, I relived the 1980's and watched a "Family Ties" marathon. I watched Alex hang his jacket in the coat closet, youngest daughter Jennifer take her school books to her room and middle child Mallory come home from shopping and deposit all her bags in her room. Even Andrew didn't leave a single toy downstairs in the den. After all these years, it's still a personal favorite even if I don't buy it.