by Kim Williamson
Prev NEXT
2 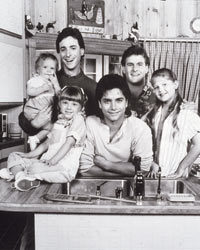 Before Mary Kate and Ashley Olsen owned a movie company, a fashion label and had paparazzi stalking them, they took turns playing the lovable Michelle Tanner, toddler extraordinaire on Full House. This was a fun, campy show about three men raising three young girls. You had an OCD dad in Danny Tanner; an overgrown kid and standup comedian in his best friend Joey Gladstone, and rockstar-wannabe in Uncle Jesse.

So, in the real world, wouldn't this house have been an absolute mess? There were three small girls, complete with diapers, Barbie dolls, school books, roller skates, sports equipment and clothes. Someone was constantly in the kitchen, preparing a meal or grabbing a snack. Danny Tanner was a morning TV host which means he should have been out of the house at 4 am and in bed by 8 pm. Jesse and Joey worked such erratic jobs and schedules that there's no way you could have counted on them to pack a lunch, push a vacuum or empty a dishwasher. Plus those two didn't seem particularly responsible.

Granted, Danny Tanner was a bit obsessive about housework, but in reality, his passion couldn't have overcome the sheer amount of mess created by six people. Before the show ended, the house got even fuller with Uncle Jesse marrying and moving in long-time girlfriend Rebecca; and to top it all off, the couple had twins! At that point, the producers should have changed the name from "Full House" to "Full of It," because no self-respecting parent should have believed that house could be so impossibly clean!