10 Things Your Dry Cleaner Doesn't Want You to Know

by Gallagher Flinn
Prev NEXT
7 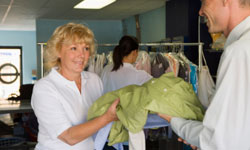 Well, at least your shirt is green even if the cleaning method isn't.
IT Stock Free/Thinkstock

Dry cleaning gets a bad rap for being environmentally unfriendly. And it's not necessarily undeserved. Perchloroethylene (perc), the most commonly used solvent in dry cleaning, is a heavy-duty industrial chemical that's both toxic to humans and a dangerous soil contaminant. But more on that later. What's worse are the supposedly "environmentally friendly" dry cleaners who are anything but.

Beware of words like "organic" and "natural" when they're used to describe dry cleaning. While the U.S. Food and Drug Administration (FDA) has strict regulations for what can be called organic food, there's no similar organization that polices the dry cleaning industry. For instance, perc and hydrocarbon solvents (one hydrocarbon brand is ironically named EcoSolv) can be called organic simply because they're made from chains of carbon. Under that definition, gasoline is "organic."