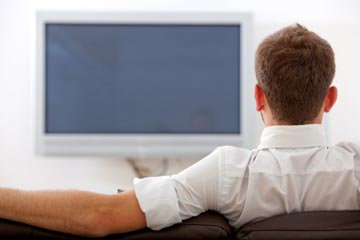 How do you make those remastered, special edition DVDs shine on your plasma screen? See more pictures of tv evolution.
©iStockphoto.com/Andresr

The image on a big, shiny, new plasma screen can be breathtaking. Movie buffs love plasma televisions with their crisp, bright displays that allow viewers to fully appreciate the elegant combat in "Crouching Tiger, Hidden Dragon" as well as the gritty battles of "Gladiator." You can immerse yourself in sweeping landscapes and see the detailed costumes of period pieces much better than with old-fashioned tube televisions or even oversized projection screens.

However, you might even be shocked at the clear image on your neighbor's new plasma screen compared to the one you've had at home for only a few months more. But don't get too jealous: It's probably not that the technology has made strides in the past few months. Rather, your screen's probably gotten a little dirty.

The screen's static electricity attracts dust as strongly as its bright picture attracts children's fingers. And both dust and smudges can dirty up your screen quickly. Soon, the picture you paid so much for will suffer significantly. Instead of paying attention to Martin Scorsese's subtle camera movements in "Goodfellas," all you'll be able to focus on is the smudge your 3-year-old made when he was watching "Blues Clues."

But before you grab the glass cleaner and spray it all over your expensive plasma screen, take heed of some important advice. You'll be doing more harm than good by soaking the screen in cleaner and wiping it with a paper towel. There are right ways and wrong ways to clean a plasma screen. Don't worry, though: We'll go over the proper procedure step-by-step to make your screen look like new again without hurting the equipment.

And when you're done, you might consider mounting that plasma screen out of the reach of little hands.