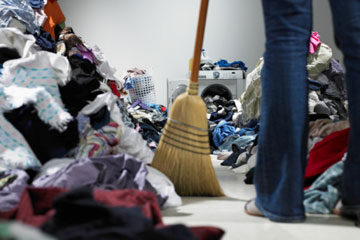 You're going to need more than a broom.
Ryan McVay/Getty Images

In the late 1940s, Homer and Langley Collyer made headlines when their bodies were discovered buried in clutter in their New York City brownstone. The well-educated brothers lived for years as recluses in a home without heat or running water, surrounded by things they had hoarded over decades. Authorities were called to the Collyer brothers' house because of a foul odor; and after gaining entry, they immediately discovered the body of the recently deceased Homer. Langley was believed to have fled. However, nine days later as they were sifting through the piles of clutter, they unearthed the body of Langley, buried under piles of newspapers and magazines that collapsed on him as he made his way around the house [source: New York Press].

The Collyer Brothers are an extreme case, but they're not alone. Chronic disorganization is a problem for many people, though it may mean different things, depending on who you ask. For one person clutter may mean being unable to manage the piles of papers that accumulate on the kitchen table. For another, clutter means not being able to find the table at all.

But whether you're someone who's collected so many objects over the years you can't walk through the door, or someone who just needs a good system to organize your bills or paperwork, it's possible to get the clutter under control. You just have to want to do it. While the definition of clutter differs from person to person, clutter control methods can be applied to any situation with positive results. Keep reading to learn effective tools for controlling clutter.

In dealing with clutter, it's important to remember that personality, environment and work style play a part not only in how clutter accumulates but how it is controlled. As a result, no single solution can be applied to every situation. However, experts stress that it's important to think in terms of "being organized" not "getting organized." In other words, getting things under control is only half the battle; maintenance is the other half [source: National Association of Professional Organizers].

While the clutter spectrum runs from moderate to extreme, basic methods can be employed to get the problem under control. First, identify your goal. Do you want to be able to open the front door or are you just looking for a way to organize the kids' toys? With a goal in mind, give yourself further motivation by visualizing what the space will look like clutter-free.

Whether your goal is to de-clutter a desk or an entire house, tackle one manageable area at a time, such as the top of the desk or one room. Follow these steps for sorting through clutter:

Sorting through clutter requires a lot of self-evaluation. If you're on the fence about which pile something should land in, ask yourself the following questions:

For those people who find parting with their treasures a difficult task, donating them to charity can make the process less painful. Knowing that their things are going to a good home makes it easier to say "goodbye."

Professional organizers agree the key to clutter control is to have a place for everything and then to use it. To be effective, the place must be convenient and hold similar items. For example, it's more likely that family members will hang up their coats if the coat closet or hooks are near the door they use to enter the house.

Living within your space also helps to keep clutter under control. Before you acquire new things, consider how you'll use them and where you'll store them. If your sock drawer is overflowing, don't buy new socks until you get rid of some of the old ones.

The methods for clutter control are easier with the proper tools. In the next section, you'll discover tools to help reign in your clutter; and the good news is that some of these things won't take up any space.

Are You Prone to Clutter?

Chronically disorganized people are often overwhelmed by clutter and exhibit the following behavior:

Motivation is the best tool to get a handle on clutter and it's usually driven by your goals. Inviting friends to your home without embarrassment or knowing where you put important documents can serve as the motivation for getting things in order.

For the initial clean up, garbage bags are essential for getting rid of trash and holding donations. Just be sure not to confuse the two. In the maintenance phase, keep trash baskets and recycling bins handy for tossing out newspapers, magazines and junk mail, but don't forget to take them to the curb for pickup. Speaking of mail, sort it each day when you bring it in the house, so it doesn't become clutter, and so bills and important documents don't get lost.

Storage bins are a great tool, but experts recommend you don't buy them until end of the process, when you know what they'll hold and where you'll store them. Apply the same philosophy to shelving and files: Don't buy them until you know how many shelves and files you'll need and how you'll use them.

Hiring a professional organizer is also an effective tool for conquering clutter. Organizers may work with a client for an afternoon to get an office under control or they may work with a family for years, helping them to obtain and maintain an uncluttered lifestyle. In some situations, a third party's ability to ask the right questions with compassion is often more effective than having a family member help.

In extreme cases or when clutter impacts physical and emotional health, mental health professionals are called in. The next section explores how clutter and health are linked.

Thinking About Hiring a Pro?

The National Association of Professional Organizers (NAPO) can help you find someone in your area. The 4,200 certified members are trained to:

They also have physical and mental endurance; they are compassionate, responsible and professional.

Although the definition of clutter differs from person to person, it's safe to say that there's a problem when storage areas are overflowing and important items are missing. At first, piles of possessions may seem harmless. But left uncontrolled, clutter can impact your health and safety in a variety of ways. Here's how:

Mentally, living in clutter is stressful, overwhelming, depressing and debilitating. Many clutterers hold onto things because they suffer from feelings of low self-esteem, fear loss and failure, or they have attention deficit disorder (ADD). Without help, it's an endless cycle. The clutterer's behavior also affects the health and well-being of family members, and in severe cases, can lead to eviction, hospitalization or homelessness [source: Compulsive Cluttering Resource Guide].

Changing behavior is not easy for a clutterer, and for a hoarder it's even more difficult because his or her emotional issues run deeper. Here are some differences between a clutterer and a hoarder:

An inventory of the items found in the Collyer Brother's home revealed that the two were indeed hoarders, not clutterers. To some extent, they were also the victims of circumstance. Apparently, the brothers inherited their parent's fully-furnished house, which was already filled with possessions. The brothers, who had many interests, added their own collections.

Unfortunately, the home, which was located in Harlem, fell victim to vandalism and crime, and the brothers reacted by boarding the windows and doors and retreating inside. As the brothers became more fearful, their behavior became more eccentric. In the early 1930s, Homer lost his sight, but Langley thought he would recover, so he saved all the newspapers for Homer to read when his sight returned. Langley used the tons of debris amassed in the house to make booby traps to capture intruders. Sadly, he was caught by his own devices [source: Psychologists World].

What Was in the Collyer Mansion?

More than 100 tons of debris and waste was removed from the Harlem house before it was demolished. In addition to paper and junk, professional movers found: 25,000 books including almost 3,000 law books; family oil portraits; Mrs. Collyer's hope chests, filled with hundreds of yards of fabric; six guns and other weapons; 14 upright and grand pianos, two organs, five violins and an assortment of other instruments; scores of 7-inch gramophone records; chandeliers; tapestries; a portrait camera and darkroom equipment; bicycles; a 9-foot-tall (2.7-meter) mahogany clock and 13 ornate mantel clocks; 13 Oriental rugs, heavily ornate Victorian oil lamps and vases; white plaster portrait busts and picture frames; a static machine used for the treatment of arthritis, rheumatism and other ailments; and, a certificate of merit for punctuality and good conduct awarded to Langley at Public School 69, for the week ending April 19, 1895.

Clutter Takes a Huge Toll on Our Lives
How does clutter affect my life?
Organizing Your Home Office

Why is there a sewage smell in your bathroom?
Disinfecting vs. Sanitizing
How can you wash and dry clothes with steam?