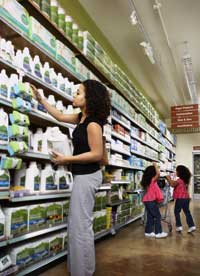 The practice of green marketing, or using claims on packaging and advertisements about an item's environmental vigor, has become more widespread as a selling technique. But with that, more questions have arisen regarding what accurately falls into the green category. As a result, the EPA and organizations such as Green Seal want to establish better standards and transparency on self-proclaimed ecofriendly products to cut the number of greenwashers out there.

Ecolabels, or third-party seals of approval defined by the International Standards Office, are one of the best bets right now for deciding which household goods are truly green. The Global Ecolabelling Network defines ecolabels as "performance leadership designations," meaning the products are not simply better for the environment than competitors, but meet more rigorous criteria [source: Global Ecolabelling Network]. To determine a product's worthiness, these third parties not only evaluate the substances used in it, but also compare it to other market competitors.

The EPA and Green Seal also have ecolabels they will grant to products upon successful review. For instance, the new Clorox Green Works line features the EPA's Design for Environment seal of approval. EcoLogo is another mark you may find that indicates no known carcinogens or mutagens among the ingredients [source: Conis]. Product submission for ecolabeling is voluntary on the part of the manufacturers.

If you don't see a third-party stamp on the packaging, check out the list of ingredients. Many times, the closer you get to au naturalé, the more you'll see -- particularly familiar items you have seen before such as hydrogen peroxide [source: GreenGuide].

Buzzwords that pop up often on green product packaging include nontoxic, biodegradable and all natural. Descriptions like these can mislead if you don't pay close attention. The term "all natural" may deceive because products can be made from organic materials but contain potentially harmful chemicals. For instance, a terpene, or carbon compound, called d-limonene is derived from orange peels, but also reacts with ozone to create formaldehyde [source: Hubert].

More meaningful cues include "non-carcinogenic" and "non-mutagenic." Non-carcinogenic means that the chemicals found in the cleansers don't cause cancer in animals or so far in humans. Since some chemicals are also known to interrupt hormone production and function in the body, non-mutagenic products would not use any such compounds.

If you want to wash your hands of the entire green cleaning quandary, there are many do-it-yourself methods for disinfecting your home. Common items around the house, such as vinegar and baking soda, can fill in where your buckets of cleaning products leave off.

To learn more about green products for the home and elsewhere, visit the links below.