Browse the article Self-Cleaning Toilets: How Do They Work? 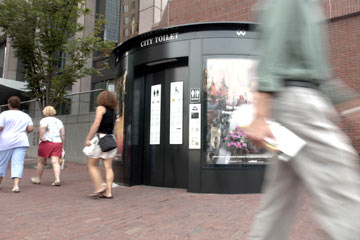 Self-cleaning public toilets are already a common sight in European cities, and in the past decade or so, several U.S. cities have also given them a try.
Darren McCollester/Getty Images

We've all experienced that feeling somewhere between annoyance and panic when an automated toilet in a public restroom suddenly flushes sooner than we expect. Now that self-cleaning toilets are springing up in public restrooms from New York to San Francisco, are we in for more of the same, only sudsier?

Self-cleaning public toilets are already a common sight in European cities (Is it just us, or does Europe always seem to get the cool stuff first?), and in the past decade or so, several U.S. cities have also given them a try. But exactly what is a self-cleaning toilet, and how does it work? More importantly, are our fears of inadvertently triggering a human carwash justified, or can we put them to rest? The answers await on the next page.

What is a self-cleaning toilet?

Here in the States, we usually think of a toilet as the commode itself, so a self-cleaning toilet can simply mean a toilet that cleans its own seat, bowl, base or some combination of the three. But in Europe, the word toilet is more commonly used to describe the entire restroom facility. In Paris and other European cities, a public self-cleaning toilet is typically a sleek metal booth just big enough to hold a commode and a sink, and the self-cleaning cycle scours the entire space. U.S. cities like New York, San Francisco and Pittsburgh have followed their lead, using the same technology and terminology for the self-cleaning facilities cropping up in their respective downtown areas.

If you haven't encountered a self-cleaning toilet yet, chances are it won't be long before you do. Read on to find out what you can expect from this ultramodern bathroom experience.

How do self-cleaning toilets work?

Most self-cleaning public toilets use a combination of timers and weight sensors to make sure the space gets thoroughly cleaned between visits -- without soaking any innocent visitors. The process works something like this: You check to make sure the toilet is unoccupied and ready for use, then open the door to begin your time. After you've used the toilet, you leave the booth, at which point the door automatically locks and the magic begins.

With some self-cleaning toilets, a robotic arm comes out of the wall behind the seat and scrubs the surface. On others, the seat itself swivels through two complete 360-degree turns, passing through a squeegee-like tool at the back that cleans the seat on the first pass and swipes away extra water on the second. And in some of the newest self-cleaning toilets, a section of wall folds down over the toilet in much the same way that a trunk lid hinges down and closes over the back of a car. The toilet is then sanitized with either a disinfectant solution or a burst of ultraviolet light.

The entire process takes anywhere from 40 seconds to 2 minutes, and if everything is working as it should, the next visitor to step into one of these state-of-the-art stalls will find a wet floor, a clean smell and sparkling surfaces without a handle or a knob in sight. And while a wet floor isn't normally something you hope for in a public restroom, in this case it's a good thing, because it means that the floor has been sanitized with disinfectant cleaner. Rest assured: As long as you leave the stall when you're finished -- and you don't attempt to dash in as the patron before you steps out (and before the self-cleaning cycle has a chance to run) -- there shouldn't be any risk of getting an unexpected shower.

We love a spotless and sanitary public restroom as much as the next person, but we have a bigger question: Why can't we have self-cleaning toilets at home?

Aside from the self-cleaning toilets, London also has "pop up" toilets for men. They're designed to, well, pop up from underground around 10 p.m. and then disappear around 6 a.m. the next day when the partiers have returned home. They don't provide much privacy, but have helped eliminate a lot of urinating on the streets.

Can I buy a self-cleaning toilet for my home?

The short answer is yes ... if you can afford it. Self-cleaning toilets for home use are far less expensive than the public variety -- those sleek booths on the streets of New York and London cost anywhere from $100,000 to upwards of $500,000 apiece -- but they're still out of reach for most homeowners.

Most residential self-cleaning toilets come with other luxury features like heated seats and footrests, lids that automatically open and close, or even integrated sound systems that play your favorite songs while you sit. But to have one in your home, you'll need to spend anywhere from $6,000 to $15,000. And unlike public self-cleaning toilets, which, for obvious reasons, clean the seat and outside surfaces, most of the in-home models focus on the inside of the bowl, spraying jets of water and deodorizing spray to keep the bowl fresh. You'll still need to wipe down the seat and the base just as often as you would a regular toilet.

Of course, the more likely you are to shell out thousands of dollars for a top-of-the line toilet, the less likely it is that you'll be cleaning it yourself. As for the rest of us, we'll add self-cleaning toilets -- along with flying cars and personal robots -- to the list of space-age conveniences that, sadly, we won't be purchasing any time soon.