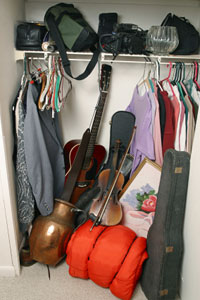 Surely you can part with some of this stuff.
Lisa F. Young/iStockphoto

Based on per capita gross domestic product (GDP) -- the value of all goods and services produced and money spent by a nation in a year, divided by the nation's number of residents -- the United States was the 10th richest country in the world (out of 229) in 2009 [source: CIA]. The United States is also a consumer economy; 70 percent of the nation's GDP was based on personal consumption -- food, clothes, entertainment, housing and other necessities and niceties [source: Hoover Institution]. In other words, Americans love to buy stuff and generally have the money for it.

That's a fancy way to say this: Surely there's some stuff in your house that you can bear parting ways with.

­Throwing out stuff you no longer need is an excellent way to kick off a good spring cleaning. First, it reduces clutter. Second, less stuff means less stuff to clean and care for. Go through closets to find old clothes. With the changing of the season, there's a perfect opportunity to look ahead to the warm-weather clothing. Any outfits that seem too last season can be chucked. Using spring cleaning as a time to switch out your winter wardrobe for your lighter clothing also gives you a chance to consider what never made it out of the closet when it was cold. These can be chucked too. Taking them to a charity for resale will open up space in the closets and help others, too. It's a win/win situation.

The garbage is obviously no place for clothes; nor is it a good place for other unwanted items you'll likely find around the house. Old furniture in the attic and piles of books can also go to the local charity, along with clothes. When cleaning out the garage, old paint cans, old electronics, solvents and other chemical items shouldn't be thrown into the garbage either. They'll be dumped in a landfill and left to seep into groundwater, potentially polluting the drinking supply. The phone book or a quick Internet search should provide you with a designated place to take pollutants. There's a certain amount of conscientiousness re­quired in getting rid of unwanted stuff from a home.

With the house so decluttered that it's approaching Japanese minimalism, it's time to begin cleaning.