Everybody's a germaphobe at the grocery store. There's a reason why they place a big dispenser of disinfectant wipes next to the shopping carts. Who knows what the last person to use the cart was up to? He might have grabbed a package of raw chicken or pork and left some meat juice on the handlebar. Or he could have had a nasty cold or flu. Better grab a second wipe just in case!

We know that every surface we touch is populated with countless microbes. Most are harmless, but a handful can make us very sick. That's the logic behind the hand sanitizer habit, trying to stay one step ahead of any pathogenic bugs lingering on grocery carts, light switches and hotel remote controls.

But what about the dangers of being too clean? Some researchers blame the proliferation of antibacterial hand sanitizers and harsh home cleaning products for an explosion in childhood allergies and asthma. In the United States, there was an 18 percent increase in food allergies among kids in the short period from 1997 to 2007. Meanwhile, rates of childhood allergies and asthma have been shown to be significantly lower in households where kids are routinely exposed to more dirt and microbes, like farms.

In the latest episode of Part-Time Genius, a new podcast from HowStuffWorks, hosts Will Pearson and Mangesh (Mango) Hattikudur tackle the thorny question How Clean Should We Be? With the help of writer and editor Penny Sarchet from NewScientist, Will and Mango find a healthy middle ground between germaphobe and filthy mess.

Clean Where It Counts

In an article for NewScientist, Sarchet studied the latest microbe research and concluded that "targeted hygiene" is the best route to overall health. She said the idea is to focus your cleaning efforts on the places where you are most likely come in contact with truly bad bugs, instead of trying to disinfect the whole world.

At home, the two areas that need the most attention are the bathroom and the kitchen. That's because the microbes that can make you the sickest are found in human poop, raw meat (especially poultry) and unwashed produce.

In the bathroom, you should regularly wipe down "touch spots" like light switches, toilet seats, the toilet flusher, faucet handles and the bathroom doorknob.

In the kitchen, wash off raw fruits and vegetables, and make sure to fully scrub cutting boards and utensils that come into contact with raw meat. Don't rinse off raw poultry, though, because you'll actually spread bacteria all over the sink. Speaking of, the kitchen sink and drain should be regularly disinfected, especially after preparing raw meat or poultry. And ditch your sponge for a washable and reusable scouring rag.

The guys asked Sarchet whether her own habits had changed as a result of researching this article. "I was hoping for an excuse to wash my hands less, being a clean freak," she replied. "But speaking to the hygiene experts who were telling me how many people get food poisoning in their homes every year gave me no excuse to cut back at all ... But we have in a garden flat so we're in and out all the time with bikes and things ... and I'm a lot more relaxed if we walk soil in — [there's] no need to thoroughly clean the floor."

Now That's Cool
You can make your own diluted bleach solution by filling a spray bottle with 1 part bleach to four parts water. Or if you think bleach is too strong, vinegar is a natural substitute. You can either spritz surfaces with straight vinegar or make a better-smelling natural cleaner out of infused vinegar, soap and essential oils.

'Whisker Fatigue' May Be Causing Your Cat's Grumpiness at Mealtime 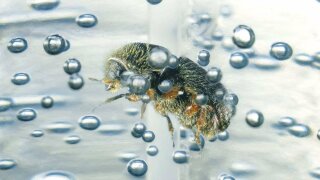 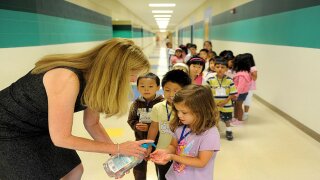 Kids Getting Sick From Hand Sanitizers 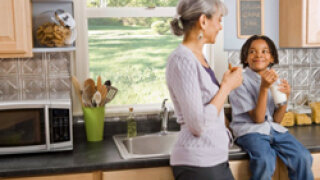 10 Reasons Why You Should Keep a Clean Kitchen