Browse the article Bedbugs: Are they coming for you? 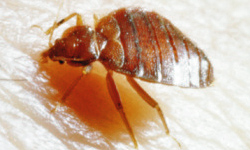 Your grandmother really meant it when she said, "Sleep tight, and don't let the bedbugs bite." The press is full of horror stories about voracious, blood-sucking bedbugs that feast on you in your sleep, leaving red, itchy welts behind. Is it all hype, or is there cause for concern?

Since their virtual eradication in the United States back in the 1950s, bedbugs have fallen off the housekeeping radar, and that's one of the reasons there's a real cause for concern. Since men started living in caves and making comfy beds to sleep on, bedbugs have been along for the ride. They take advantage of our warm-blooded nature, literally, to move in and gorge on the red stuff. In the olden days, folks boiled their bedding to deal with the pests, and diligent housekeepers vacuumed daily and watched for the telltale signs of a growing infestation.

Bedbugs are tiny, about a quarter of an inch long as adults, and they're relatively flat. This makes it easy for them to hide in cracks, crevices and carpeting. Today's super bedbugs are all that and resistant to many pesticides, too. To make matters worse, some of the most effective bedbug pesticides of old, like DDT, are too dangerous for the environment, and bedbugs have developed a resistance to others, like malathion and diazinon. Pesticides for common household pests, like cockroaches, are now put out in bait form rather than as broadcast sprays. Baits are ineffective against bedbugs, which leaves U.S. homes ill-prepared and relatively unprotected.