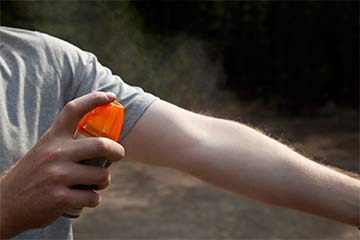 Most of the bug sprays we use on our bodies act as repellents to keep insects away rather than killing them.
TinkerJulie/iStock/Thinkstock

Bugs have us outnumbered. By a lot. They swarm through our backyards, scamper through our houses -- even crawl across our skin. According to the Smithsonian Institute, there are more than 200 million insects for every human on the planet, and one soil sample study in Pennsylvania found 425 million insects in a single acre. With numbers like those, we can't hope to eradicate bugs, and with the huge and vital role they play in our ecosystem, we wouldn't want to. But sometimes we want to keep them away from us. Preferably far, far away. That's where bug spray comes in.

Most of the bug sprays we use on our bodies act as repellents, while the products we use to keep six-legged pests out of our homes may be either repellents or insecticides. Some bug sprays are effective against just about anything they come into contact with (unfortunately this also includes birds, fish, and small mammals), while others work only on certain insect species. Farmers, resort communities and even military outfits often use insecticide sprays to control bug populations across large areas, but in this article we'll focus on the kinds of bug sprays we use around our homes and on our skin.

Whether you need to rid your kitchen floor of ants or keep mosquitoes from ruining your camping trip, you'll find any number of options on supermarket shelves, but the active ingredients listed on each label are enough to make you wish you paid more attention in chemistry class. So, what are all those ingredients, and what do they do?

Have you ever wondered why there are so many different types of bug sprays for the pests in and around our homes -- one for wasps and hornets, one for ants and roaches, and still another for fleas and ticks? As it turns out, they contain very similar insecticides, although their specific ingredients and formulations differ depending on how and where the sprays will be used.

Most household bug sprays contain one or more insecticides in the pyrethroid family. Pyrethroids are synthetic chemicals designed to mimic the natural oils found in chrysanthemum flowers [source: National Pesticide Information Center]. They affect an insect's central and peripheral nervous systems on contact, causing tremors, paralysis and a quick death [sources: EPA, NPIC]. Pyrethroids are effective against all sorts of insects, including beneficial bugs like bees and butterflies. They're also highly toxic to fish.

Pyrethroids such as permethrin, prallethrin and cypermethrin are the active ingredients in many wasp and hornet sprays. If you've ever had to deal with a nest in your yard, you know that it's best to spray in the evening, when these insects are less active. This is partly so they won't dive-bomb your head as you attempt to wipe out their home and family, but it's also for efficiency, since the spray is likely to instantly terminate any wasps that are in the nest.

Pyrethroids are also found in sprays targeting ants, roaches, silverfish and other crawling critters. Since it's not always easy to find the source of an ant or roach invasion, these sprays need to work over an extended time to effectively kill insects outside their nests. For this reason, ant and roach sprays usually contain piperonyl butoxide, an additive that prevents the insecticide ingredients from degrading before they can work [source: NP IC]. These sprays are applied along walls, doorways and insect trails, and the bugs are killed when they ingest or crawl over the residue.

Household flea and tick sprays use pyrethroids to kill adult fleas and ticks, piperonyl butoxide to extend the life of the insecticide ingredients, and a growth inhibitor like pyriproxifen to prevent new eggs and larvae from developing [sources: Doctors Foster and Smith, NP IC].

Commercial farmers and backyard gardeners have long relied on a class of insecticides known as neonicotinoids for their effectiveness against aphids, beetles and other plant-eating pests. Unfortunately, these neurotoxic liquids and sprays have recently been linked with colony collapse disorder and the decline in the population of honeybees and other pollinators. To help protect bees, check the labels at your local garden center: Products containing neonicotinoids are now required to have a "bee advisory box" on the label [sources: EPA, Texas A&M AgriLife Extension]. 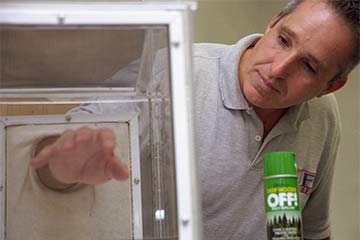 Jonathan Day, Ph.D, of the University of Florida Medical Entomology Laboratory, sticks his arm in a cage filled with mosquitoes to demonstrate the effectiveness of repellants containing DEET.
Cliff Partlow/Getty Images

In the great outdoors, it would hardly be practical (or desirable) to kill all the bugs around us. Instead, we just want them to leave us alone. Bug repellent sprays work by making us invisible or unattractive to insects such as mosquitoes, ticks, biting flies and chiggers, encasing us in our own temporary protective barrier.

The Centers for Disease Control and Prevention (CDC) recommends using insect repellents that have been registered with the EPA. Only products that the EPA has evaluated for safety and effectiveness can be EPA-registered, and as of July 2014, only the following active ingredients are used in EPA-registered skin-applied repellents [source: EPA]:

Of these, the CDC recommends products containing DEET, picaridin, IR3535 and oil of lemon eucalyptus for the longest-lasting protection against mosquitoes and other bugs. DEET is the most commonly used by far, with more than 500 EPA-registered bug repellents listing DEET as their active ingredient [source: EPA]. Found in brands like Off, Cutter and many others, DEET is sprayed directly onto skin or clothing. It works by interfering with insects' odor receptors, making it difficult for them to smell us [source: EPA, Howard Hughes Medical Institute].

Picaridin, found in 40 products including Sawyer and Natrapel brands, prevents mosquitoes and other insects from finding or recognizing their prey [sources: EPA, NPI C]. Like DEET and the others on the EPA-registered list, picaridin doesn't kill mosquitoes or other insects; it just keeps them away.

IR3535, found in Avon Skin-So-Soft products, is a proprietary formulation of the amino acid alanine [source: EPA]. Like catnip oil, oil of citronella and oil of lemon eucalyptus, IR3535 is classified as a biopesticide (as opposed to a conventional repellent), since it is derived from natural materials [source: University of Nebraska-Lincoln].

In addition to EPA-registered products, you may also encounter bug repellent sprays that are EPA-approved. These products contain ingredients such as cedar oil, geranium oil, peppermint oil or citronella oil (which is also found in some registered products), all classified as minimum risk pesticides [source: EPA]. But while the EPA has evaluated these products for safety, they have not been tested for effectiveness.

The skin-applied bug repellents approved by or registered with the EPA have all been evaluated for safety, and their presence on either list means that the EPA has determined that they pose minimal risk to human health. In fact, with tick-borne illnesses like Lyme disease infecting as many as 300,000 people in the U.S. each year and the mosquito-borne West Nile Virus reported in at least 30 states as of July 2014, there is some level of health risk involved in notusing bug spray if you're in an area populated by mosquitoes and ticks [sources: CDC, CDC].

Of the conventional skin-applied repellents on the EPA-registered list, DEET is not only the most common and most effective, but also the most controversial for consumers concerned about exposure to chemicals. DEET has been in use since 1946, and the EPA reviewed its safety in 1998 and again in 2014, both times concluding that the insect repellents containing DEET do not present a health concern to people [source: EPA].

The American Academy of Pediatrics (AAP) recommends that parents use products containing DEET concentrations between 10 and 30 percent for children older than two months of age, and not at all for children under two months of age. But the EPA has approved DEET for use on children with no age restriction. Of the EPA-registered repellents on their list, only oil of lemon eucalyptus is age-restricted: It should not be used on children younger than three years of age.

Household bug sprays are formulated for use on insects and floors -- not skin -- but their safety to humans, pets, and the environment is still a concern. Bug sprays formulated for inside use may contain fragrances that mask their chemical smells, but the labels make it clear that they shouldn't come into contact with skin, and they should never be used around food, children or pets. Exposure to the pyrethroid insecticide cypermethrin, for example, has been shown to cause tremors, writhing and convulsions in mice and rats and burning, dizziness and itching in humans [source: NPIC].

Inside pests such as ants and roaches may be more effectively controlled with traps, gels, baits or granules that the insects carry back to their colonies and that humans are less likely to inhale [source: Consumer Reports].

If you're worried about the ingredients found in conventional household bug sprays, look for products containing d-Limonene, derived from citrus oils, which kills insects on contact by destroying the coating of their respiratory systems and also acts as a repellent [source: Russ].

I'm the mosquito magnet in my family. But even so, I've generally thought of mosquitoes and ticks as little more than a summertime nuisance. Sure, they're itchy and gross, but growing up, we worried more about the possible effects of DEET than any lasting health risks from bites. (Worldwide, of course, mosquitoes have always been a huge concern, killing an estimated 600,000 people per year through the spread of malaria [source: Gates].) After spending hours on the EPA and CDC websites to research bug sprays, I'm now more worried about the bites and a little less concerned about products containing DEET.