10 Places Asbestos Could Be Lurking 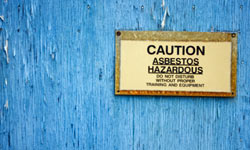 In Internet language, "lurking" is frequenting Web sites, sometimes even leaving anonymous postings, and hovering around an online community without coming forward and letting everyone know you're there or who you are. Asbestos acts the same way. It lies hidden, persists in hanging around in a house, but doesn't announce itself. Responses to both types of lurkers range from annoyance to outrage to fear to "who cares?" Living peaceably with a virtual lurker is one thing, but what about living with asbestos? In most cases, it's probably best to actually leave asbestos alone, but once it starts intruding on your health and safety, it's time to call in a professional.

Beginning in the late 1970s and continuing through the late 1990s, asbestos products in the United States were banned and phased out, but any that were used before the bans went into effect remain in place [sources: CPSC, Howard University]. Asbestos has links to diseases ranging from mesothelioma and lung cancer to asbestosis -- all serious and often deadly diseases -- so recognizing where it remains and when it needs to be dealt with is important [source: EPA].

Although asbestos occurs naturally in mineral form and is a strong, heat-resistant fiber, it's also a tiny and potentially deadly component used to strengthen man-made materials. These asbestos containing materials are called ACMs. At a size "700 times smaller than human hair," an asbestos fiber isn't something you can see on your own or detect by poking around for it -- and overwhelmingly, the advice is don't go poking around for it, because breaking up an ACM will release the toxic particles [source: Princeton University].

How then can you find where or whether it's lurking about, and how should you treat it? Let's look at some common asbestos hide-outs in the home.