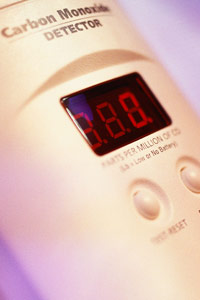 A carbon monoxide detector with a digital display.
Stockbyte/­Getty Images

­Known as "the silent killer," carbon monoxide (CO) is a colorless, tasteless, odorless gas that comes from the incomplete burning of fuel. Just about anything you might burn in or around your home -- whether it's gasoline, wood, coal, propane, natural gas or oil -- can produce carbon monoxide in the right conditions. Without enough ventilation, the gas can build up to deadly levels. And it doesn't take much fuel to be dangerous: Even small tools like chainsaws can release enough CO to make you sick.

­Carbon monoxide enters red blood cells, quickly taking the place of the oxygen your body needs. Your blood then carries the CO to your organs. If you inhale small amounts of CO over a long period, the exposure might not be fatal, but it can ca­use permanent damage t­o the brain, lungs and heart. Moderate levels of CO exposure can cause burning eyes, nausea, vomiting, dizziness, severe headaches, breathing difficulties and confusion. These symptoms are easily mistaken for other common illnesses, like food poisoning or the flu. If carbon monoxide begins to fill a home while people are sleeping, the exposure can be fatal before anyone realizes something is wrong. Infants, the elderly and people with respiratory and circulatory illnesses are at an increased risk of fatal CO poisoning.

You can reduce your risk of carbon monoxide poisoning by keeping your fuel-burning appliances well maintained and using combustible fuels only in well ventilated areas. Another important step is installing a carbon monoxide detector in your home. In this article, we'll take a look at how carbon monoxide detectors sense and respond to this deadly gas as well as what to look for when you're shopping for one.

Inside a Carbon Monoxide Detector 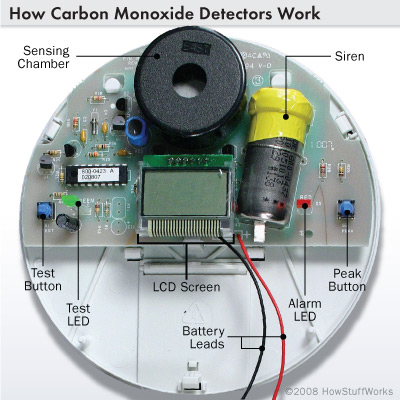 The interior of a carbon monoxide detector. When pressed, the peak button causes the LCD screen to display the highest level of CO recorded since the last reset.
© 2008 HowStuffWorks

You may be surpr­ised to discover that a carbon monoxide (CO) detector really isn't a complicated piece of equipment. Housed inside a plastic chamber approximately 3 inches (7.6 centimeters) in diameter are parts that work in unison to alert a househo­ld when lethal gas is detected. The exact components can vary from one model to another, but here's a run-down of the basic parts:

­CO detectors can use several types of sensors to sense carbon monoxide in the air. Biomimetic sensor technology reproduces CO's effects on hemoglobin in the blood. In a biomimetic sensor, a gel changes color as it absorbs CO. A separate sensor detects the c­olor change and alerts the detector's processor to sound the alarm. Once a biomimetic sensor has changed color, it must be placed in a CO-free environment to reset itself. Biomimetic sensors can also be used on portable CO detector cards -- if you see the disc on the card turn dark, there's a dangerous amount of CO in the air.

Metal oxide semiconductor sensors use circuits applied to a silica chip. When CO comes into contact with the circuitry, it lowers the electrical resistance. The processor detects the change and causes the alarm to sound. These sensors require lots of electricity, so they generally plug into wall outlets rather than using batteries.­

What If My CO Detector Activates?

If your carbon monoxide sensor goes off, don't panic. First, determine if anyone in your household is feeling sick. If not, open the windows and doors to clear the air, and don't go back inside if the alarm continues to sound. Contact a professional to service any fuel-burning appliances in your home. If anyone is showing flulike symptoms, call 911 or your local emergency services number, and leave the building immediately. 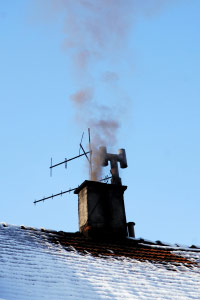 Having your chimney inspected annually and cleaned when necessary can lower your risk of carbon monoxide poisoning.
© iStockphoto/Maciej Korzekwa

­In the United States, emergency rooms treat about 15,000 people for carbon monoxide (CO) exposure each year, and an average of 480 people die from carbon monoxide exposure annually [source: CDC]. Most nonfatal exposures happen in people's homes, which is why it's important to have a CO detector to go along with -- or as part of -- your smoke detector.

Before selecting a carbon monoxide (CO) detector, do a little research. Determine whether your local laws require you to have CO detectors of a particular type or configuration. You'll need to decide whether you'd rather have a battery-operated or plug-in detector. A plug-in unit goes into any wall outlet and can be moved to another room if necessary. But unless y­our plug-in unit has a battery backup, you're unprotected in the event of a power failure. This may not seem like a big deal in the case of temporary outages, but imagine a long power outage during winter. You may turn to a portable space heater or a wood stove to keep your home warm -- exactly the sort of fuel-burner that may release CO into the air.

Battery-operated units, on the other hand, are typically attached permanently to a surface in your home. This usually isn't a problem unless your detector mistakes other gases for CO, causing false alarms and prompting you to move the unit. Depending on the size of your home and the number and location of fuel-burning appliances, a combination of types may work best. Follow the manufacturer's instructions for placement, maintenance and scheduled inspection.

The NFPA also recommends using detectors that can be linked together so that one alarm sets off all the others, alerting the whole household.

Installing CO detectors is only one step in preventing carbon monoxide poisoning. Other important steps include:

Finally, test your carbon monoxide detector once a month -- it's your last line of defense against a malfunctioning stove or heater.