by Cristen Conger
Prev NEXT
3 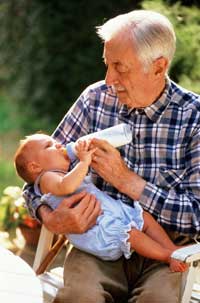 Canada has banned the sale of polycarbonate plastic bottles because they can release BPA.
Laurance Monneret/Getty Images

Canada has taken the first steps to outlaw the sale of baby bottles made from polycarbonate plastics, which are the most common type on the market. It has done so because the plastics are made with a chemical called bisphenol-a (BPA). When heated, these types of baby bottles can release BPA.

What's wrong with a little BPA mixed in with a baby's formula? BPA has a structure very similar to estrogen and for that reason is referred to as a "hormone disruptor." As the name implies, hormone disruptors can interfere with the natural human hormones, especially for young children. According to a joint U.S.-Canada study conducted by a group of environmental health organizations, BPA in products and inside a woman's body (from using BPA-containing products) may cause development and neurological problems for fetuses and infants based on the results of extensive animal trials [source: The Working Group for Safe Markets].

In one study by the U.S. Centers for Disease Control and Prevention, 93 percent of participants had detectable levels of BPA in their systems [source: CDC]. Of those, children had the highest concentrations [source: CDC]. Other common products containing BPA include refillable plastic bottles, compact discs and some plastic eating utensils [source: CDC].

In 2006, the Whole Foods grocery chain stopped carrying plastic baby bottles [source: Underwood]. In response to Canada's removal of polycarbonate plastic baby bottles from the market, the U.S. Food and Drug Administration has formed a BPA task force to study any risks associated with the material. Based on the research so far, the agency maintains that the bottles being sold in the U.S. are safe for use [source: FDA].