If I have a gas leak in my home, will I die?

Browse the article If I have a gas leak in my home, will I die? 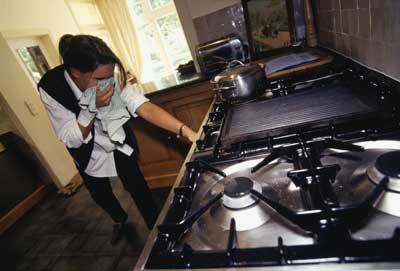 A natural gas leak in your home can potentially kill you.
David De Lossy/Getty Images

That sulfuric, rotten egg odor that signals a natural gas leak isn't an ordinary component of the carbon-hydrogen compound. Because of the potential danger associated with natural gas leaks, suppliers add the noxious scent to natural gas as an olfactory warning that the harmful vapors are loose in the air.

This precautionary measure indicates the inherent hazards of natural gas that can, at the right levels, kill you. That said, natural gas is repeatedly touted as one of the safest and cleanest-burning fossil fuel sources. More than 65 million homes in the United States use it to power their gas stoves, water heaters and other essential appliances [source: Safe Gas Indiana]. When correctly burned, natural gas produces mostly water vapor and carbon dioxide and far fewer greenhouse emissions than wood, coal and oil [source: Alberta Energy].

Natural gas has become a widespread energy source because it's highly combustible, which means that it can produce large amounts of heat when you burn small amounts. Consequently, a natural gas leak can increase the risk of fire and explosion since it spreads quickly and combusts easily. An electrical spark or fire source can set this off if you have a leak in your house.

If you suspect a natural gas leak inside, immediately stop what you're doing (do not flip any electrical switches, unplug anything or use a telephone) and go outside. Inhaling high concentrations can also lead to asphyxia (when the body is deprived of oxygen) and possibly death. Early symptoms of asphyxia include fatigue and chest pain.

Although generally safe to use in the home, when natural gas does not burn up completely because of faulty installation or lack of ventilation, it emits a byproduct of carbon monoxide. The more carbon monoxide present in the air, the less oxygen you can inhale, potentially killing you. In fact, 500 people in the United States die of unintentional carbon monoxide poisoning every year [source: Centers for Disease Control and Prevention]. ­

What if you have a cold or a poor sense of smell? Is there any way to detect a natural gas leak besides that signature scent? Find out on the next page. 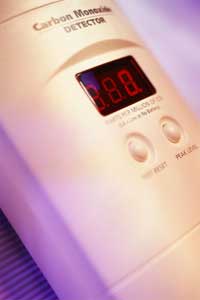 Carbon monoxide detectors can alert you if levels become unsafe in your home.
Stockbyte/Getty Images

Natural gas occurs in its rawest state as a colorless, odorless gas formed over millions of years within the Earth. It has resulted from millenniums of compression of decomposing organic materials in the same way that other fossil fuels were created. Consumers access natural gas through millions of miles of pipelines that extract the hydrocarbons from their earthen reservoirs, remove impurities and transport it as mostly methane gas.

If you have a gas stove, there are about five to 15 parts per million of natural gas in the air inside your home. More than 30 parts per million crosses into dangerous levels of natural gas and indicates a faulty stove. How do you know if the methane levels in your house are safe? You can buy a natural gas detector or a carbon monoxide detector that will sound an alarm if gas levels exceed a safety threshold.

While natural gas used indoors can pose health risks, the greatest chance for a natural gas leak happens outdoors. Since more than 2 million miles of natural gas pipeline funnels the fuel underground in the United States, you must take caution when digging in your yard. Signs of a broken natural gas pipe include dirt blowing up from the ground on a windless day, a hissing sound or bubbling water.

If you plan to do any deep digging around your house, call 811 for the national Underground Service Alert network a few business days prior to digging. The free service will map out any utilities, including gas pipelines, buried beneath your land. Striking a pipeline can endanger your life since the gas is highly explosive and could disrupt natural gas service to surrounding homes [source: Reuters].

For related information on natural gas, visit the links on the next page.