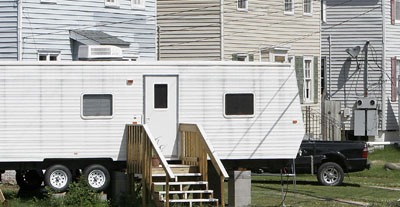 Many people left homeless by Hurricane Katrina in 2005 survived that storm only to suffer another setback. Soon after moving into government-provided trailers, they began experiencing a range of health problems, from headaches and runny noses to difficulty breathing. Upon further exploration, tests revealed that the trailers had levels of formaldehyde as high as 50 times the U.S. Environmental Protection Agency's "elevated" level of 5 parts per million [source: Brunker]. It seems that the carcinogen was leaching from the composite wood and plywood panels used in the trailers. After years of insisting that the trailers were safe, the U.S. Federal Emergency Management Agency finally had the residents evacuated in early 2008.

Similar, though less attention-grabbing, occurrences happen every day. Health effects from indoor air pollution can be immediate and short-lived, or they may be severe and not show up until years after repeated exposures. The most common symptoms are sore throat, headache and persistent cough, as well as itchy, running eyes and nose. More severe symptoms include chronic breathing problems, heart disease and cancer.

Perhaps one of the most visible indoor air pollutants is environmental tobacco smoke, or secondhand smoke, which contains 200 known poisons and at least 43 compounds known to cause cancer. Even if you don't smoke, you may be subject to secondhand smoke if you live or work with someone who does. So-called "passive smoking" is responsible for around 3,000 lung cancer deaths and 35,000 to 50,000 heart disease deaths each year in nonsmoking adults. It also causes between 150,000 and 300,000 respiratory infections in infants each year and worsens the asthma of up to 1 million asthmatics [source: American Lung Association, EPA].

Other indoor air pollutants, like the ones in the following list, are largely invisible, but just as dangerous. Consider:

You can learn more about many of these pollutants in the HowStuffWorks articles A Guide to Home Safety and How to Allergy-Proof Your Home. Learn about ways to reduce indoor air pollution on the next page.

Just when you think the acronym soup couldn't get any worse, out come the two BRIs (building-related illnesses): MCS and SBS. MCS stands for multiple chemical sensitivity, while SBS is shorthand for sick building syndrome. Sick building syndrome, which involves symptoms such as headache, fatigue and muscle pain, is milder than MCS and usually goes away within a few hours or days upon leaving the infected building. In contrast, MCS is a lifelong condition, and common symptoms may include fatigue, depression and difficulty concentrating. MCS isn't recognized by all doctors as a legitimate illness.