What if everybody in the United States flushed the toilet at the same time? 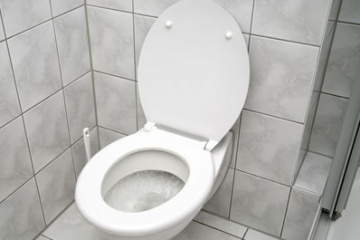 Could the sewage system handle it if we all flushed simultaneously?
Christoph Ermel/Getty Images

If everyone in the United States flushed the toilet at the same time, sewer systems across the country would be overwhelmed with wastewater.

Nov. 19 is World Toilet Day, a time to reflect upon how far modern sanitation has come. In the United States in 2005, less than half of one percent of the country's more than 124 million households didn't have a flushing toilet [source: U.S. Census Bureau]. In comparison, 71 percent of India's total population of more than one billion people had no access to a toilet that same year. There were an estimated 350 million public and private toilets in the United States by the mid-1990s [source: Flushmate] -- a lot of toilets by anyone's measure. So what would happen if everyone in the United States decided to flush their toilets at the same time in celebration of World Toilet Day?

Since as far as we could find out -- no one's ever tried it before -- we can't say for certain exactly what would happen. But we can take a pretty good guess: "It would be ugly," says Steve Cox, one wastewater treatment facility operator we interviewed.

The average home in America is outfitted with sewer pipes around four inches in diameter. The pipes from your home are connected to subdivision systems, which connect together at street systems. Street systems tie into road systems, which go to main road systems, and, ultimately, waste treatment plants. Underneath your town is a wastewater system as complex as a spider's web.

The closer you get to the treatment plant, the larger the inside diameter of the pipes becomes. So a four-inch pipe from your house connects to a 12-inch pipe and so on, until -- in larger cities -- pipes may be almost 10 feet in diameter. A pipe this size can hold a lot of water, but can it hold enough for everyone to flush at once?

­If everyone in each of Milwaukee, Wisconsin's 330,584 households all flushed just one toilet at the same time, and each of those toilets expelled 3.5 gallons per flush, then Milwaukee's sewer system would suddenly be inundated with 1,157,044 gallons of wastewater [source: NexTag]. Even with the city's new 108-inch pipes, this could be a problem, and we're not even counting all of the public toilets in the city.

Of course, the earth isn't level underneath many cities, and to overcome changes in elevation, sewer systems use lift stations, wastewater plants that push sewage uphill toward its final treatment destination. These stations would be the first overwhelmed by unanimous flushing. There would simply be too much wastewater trying to pass through the pipes at the same time -- kind of like trying to force an orange through a drinking straw -- and the flow of sewage would stop. Sewage already past the lift stations would return downhill, and as the lift stations flooded, the lines leading to them would back up.

Eventu­ally this sewage would find its way to the place where this whole debacle originated -- your home. Backflow valves probably wouldn't help. Not only would your toilet overflow, but so, too, would every wastewater line in your home, including your shower, kitchen and bathroom sinks, and even your dishwasher and washing machine.

Outside, the manhole covers dotting the street would also flood and overflow, leaving people in sewage possibly more than ankle deep. Depending on how many people live in your city and how large the sewer pipes are, it could be even worse.

But with low-flow toilets, this scenario wouldn't be quite so bad. Find out about new toilet technology on the next page. 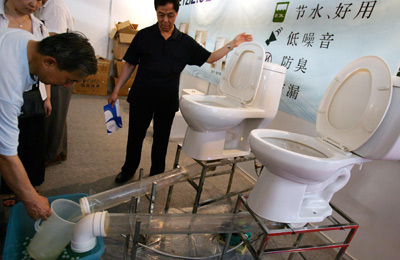 In Beijing, China a very low-flow toilet is demonstrated using only a half-gallon of water.
Courtesy China Photos/Getty Images

If everyone in Milwaukee conducted the same experiment from the first page using only low-flow toilets, only 528,934 gallons of wastewater would suddenly deluge the city's sewer system. This would still cause quite a mess, but it would correct itself much faster, and the water pressure would equalize more quickly, too.

But low-flow toilets weren't designed to save Milwaukee from a public health hazard and an environmental catastrophe. They were designed to conserve water. And they have become so valuable at serving this purpose that they have replaced traditional toilets in stores. In fact, it is federal law that no toilet may be produced in the United States that uses more than 1.6 gallons per flush.

When they were first introduced in the early 1990s, low-flow (or low-flush) toilets were accepted warily by consumers in the United States. They clogged easily, and even when the toilets didn't clog, they often failed to do their job on the first try. Some consumers griped that they had to flush the toilet more than once. If a homeowner had to flush a low-flow toilet three times, then he or she used 4.8 gallons, more than a gallon more than with a traditional toilet.

Some Americans became so fed up with low-flow toilets that they crossed the northern border into Canada to purchase 3.5-gallon toilets, since none were available for sale back in the States. But low-flow technology has improved since the '90s, and the next generation of low-flow toilets appears to combine improved function with water conservation.

The United States Environmental Protection Agency (EPA) suggests that consumers in the market for a toilet should look for the WaterSense label. This certification is given to toilets that use no more than 1.28 gallons per flush, verified by testing at independent laboratories.

The EPA estimates that the average American will flush the toilet around 140,000 times in his or her lifetime. Since the amount of available water has become a real issue in the United States in the past few years, low-flow toilets are helping to allay a growing problem. The EPA is not the only governmental agency encouraging Americans to replace their toilets with low-flow toilets: Some American municipalities are offering $50 and $100 rebates as incentives for homeowners to make the switch. If everyone in the United States used only WaterSense toilets, the country would save an estimated 900 million gallons of water per day, equal to roughly twenty minutes of flow over Niagara Falls [source: EPA].

Just the savings alone (around $90 per year on your water bill) is reason enough for many people. But don't forget to take into account that if everyone switched to WaterSense toilets, it would cut the amount of mess caused by everyone flushing their toilets at the same time by more than half. And avoiding ankle-deep sewage is good for everyone.

For more information on toilets and sewers, be sure to visit the next page.