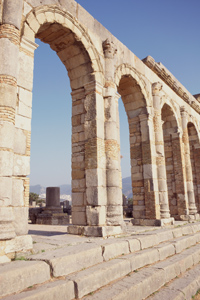 A composite of cement, sand, pebbles and water, concrete is the oldest manmade building material. The Romans used it as early as 509 B.C. They built extensively and impressively during the Roman Republic era. The ruins that people flock to see -- the Pantheon, the Coliseum, Pompeii -- were built of, and stand in testament to the durability of, concrete.

After the Roman Empire collapsed around 400 A.D., concrete construction disappeared from Europe. Not until 1754 did concrete technology resurface. William Smeaton, founder of civil engineering in England, developed a mortar of limestone and clay that hardened under water. He used this on the limestone footings of the third Eddystone Lighthouse off Plymouth in Devon, England.

Seventy years later, another Brit, Joseph Aspdin, patented an improved version of Smeaton's hydraulic lime mortar and called it Portland cement. Still, building with concrete didn't take off until 1871, when David O. Saylor, an American, patented his own well-researched and tested formula of hydraulic cement and built a factory to produce it in large quantities.

Today, concrete is the most widely used building material in the world. Because of its hydraulic nature, concrete can be used as underwater support for bridges, docks and piers. Its compressive strength makes it ideal for roads and skyscrapers. And its fluid versatility lends itself to architectural grace in bridge arches and plaza fountains.

So how do these qualities translate into concrete being a desirable countertop material? Keep reading to find out.