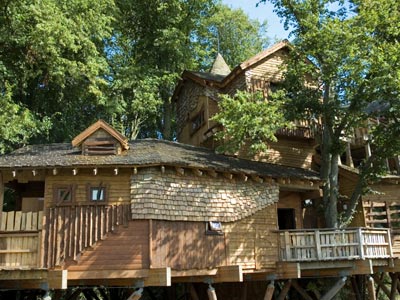 Designer tree houses can be as big and ornate as your tree can stand. See more pictures of home design.
RMAX/iStockphoto.com

When you were a child, your tree house was a magical place. Your very own hideaway high in the clouds could transform you into a princess in a castle or an astronaut preparing for a journey into outer space. As we grow older, that same tree house where we dreamed and created ultimately gets abandoned, morphing into a crude structure that we realize is only about five feet (152.4 centimeters) off the ground and a faded sign still reads "no adults allowed."

But even as adults, a tree house can be a quiet place to commune with nature and observe life from a different vantage point. So, it's good to know that there are tree houses available especially for adults. These designer dwellings are definitely more house than clubhouses. They have furnished rooms and sometimes even more than one story. You may have become an accountant instead of an astronaut, but you still need a place to escape from the hustle and bustle of everyday life -- and now you can afford the accoutrements.

Designer tree houses can be used as offices, guest houses, art studios, yoga rooms or simply as a quiet retreat to recharge. And if you have a tree in the right location, you might even be able to live in your tree house. But if you don't have the means to build one on your property but desire a taste of living above the ground, tree house tourism is a popular substitute. These unique destinations are found all over the globe and offer accommodations ranging from pared-down cabins to luxury resorts.

In our next section, we'll take a brief look at the long history of tree houses.

Tree house life has largely been a storied fantasy, its details woven into books such as "The Swiss Family Robinson" and "Peter Pan." But they actually have a long and rich history in the real world. Tree dwellings can be traced back to the people of the South Pacific and Southeast Asia, who lived in trees to provide secure homes for their families. They came and went via thatched baskets that were raised and lowered down the tree trunk. In the Middle Ages, Fransiscan monks used very basic tree-rooms to meditate, and Hindu monks also lived in tree houses to free themselves from earthbound considerations.

Many centuries later, the Renaissance period in the early 1500s brought a renewed interest in Classical culture, and the tree house became a must-have in Florentine gardens. In the mid-19th century, a town just west of Paris called Plessy Robinson became famous for its tree house restaurants, where chic Parisians could be found during their leisure time. The restaurants were built in chestnut trees, covered in rambling roses and had 200 tables at the height of its popularity. Meals were hoisted up to diners in a basket pulley and often consisted of roast chicken and champagne.

British nobility also enjoyed their tree houses, and they became an important part of the culture in Tudor England. It was said that Queen Elizabeth I dined in a massive linden tree. These English tree houses were attached to the tree using rope, which would be tied in summer months and un-tied in winter months to allow the tree to grow. One of the oldest tree houses still in existence is located in a 500-year-old lime tree in Pitchford, England. It was designed in the popular English Tudor style, and is known as "The Tree with a House in It."

In more recent times, Winston Churchill constructed a tree house 20 feet (609.6 centimeters) high in a lime tree at his Chartwell Manor home, and John Lennon was rumored to have a tree house overlooking the Strawberry Fields orphanage.

Finally Reached that Penthouse in the Sky

Cosimo Medici, the Grand Duke of Tuscany, commissioned a tree house on the grounds of his home that contained a fountainlike system of pipes and taps that spouted water into the air. Apparently keeping up with the Joneses started a long time ago, because Medici's son, Francesco, promptly commissioned his own tree house. He called his masterpiece "The Fountain of Oak," which had two massive spiral staircases leading to a platform 25 feet (762 centimeters) off the ground and was set with a large marble table and fountains.

Choosing a Tree for a Designer Tree House

Designing and building a tree house has unique challenges compared to building a structure that sits on the ground. Because you're building in and on a living, breathing thing, it's a process that requires extra thought and care, using sound environmental principles. The tree must have the freedom to continue to grow, not to mention the house will be subject to elements like wind and rain that are more concentrated in higher skies.

The first and most important step is to choose the right tree. Almost any mature deciduous or coniferous tree is a good choice, as long as it's healthy. Deciduous trees (trees that lose their leaves in the winter) generally have dense wood that can support larger loads. It's essential that the tree is healthy and will continue to thrive despite the addition of extra weight. It also needs to have a solid and intact root structure. Signs of a tree with health issues include multiple dead branches, leaf discoloration or liquid oozing from the bark. Working with a professional tree specialist, an arborist, can help make these determinations.

A healthy tree will treat a properly installed tree house the same as it would additional branches, which means growing additional wood to support it. For this reason, multi-storied houses are best built over the period of a couple of years, to allow the tree to adapt to the load.

Wind is also a big consideration in tree house design. A tree house acts like a sail on a boat in strong winds, creating resistance that adds a considerable load to the tree's roots. A tree will compensate for the weight of the tree house over the first few years by adding thickness to its root structure. So when coming up with a design, keep in mind that a tree house that's lower in the tree will produce lower forces on its roots and stands less chance of being knocked over by gale force winds. Wind also means that trees sway back and forth, so the support structure of the tree house needs to allow for this to happen.

Rapunzel Rapunzel, Let Down Your Hair

You don't ever need to worry about being stranded in your castle in the sky, because trees grow larger by increasing their diameter and creating new branches. So your tree house won't get higher as the tree grows. 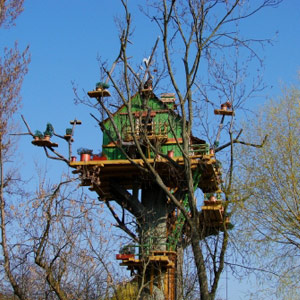 Take every safety precaution you can when building your tree house, especially if you're going this high.
fotolinchen/iStockphoto.com

Hardcore tree house enthusiasts have some guidelines for what constitutes a tree house. The tree must be an integral part of the structure, and it must have the ability to stay in the air. In some cases, minimal ground support may be necessary to ensure safety, but if the tree is removed and the structure is standing, it's considered a playhouse.

The shape of the tree will largely dictate the design, but there are many other architectural details to consider during the design process. First, the tree is still growing, and the design needs to accommodate the growth to keep the tree in good health. Using nails, screws and bolts can create puncture wounds that can harm the tree and weaken its structure, especially if they're placed close together. It's best to use a single, large bolt that fits snugly into a cleanly drilled pilot hole. As trees grow, they form new rings of bark, so eventually the bolt will grow into the tree.

Given their place in nature, many professional builders use reclaimed timber to build tree houses. But you can also employ the same kind of wood you would use to build a regular house. Pressure treated timber is well-suited for framing, and exterior plywood is good for the floor and walls. But plywood doesn't allow drainage or ventilation, so it's important to build a solid roof that's pitched at least 30 degrees to allow rain to run off easily. You can choose glass or plastic for the windows. Glass is clearer and scratch-resistant, but it's more prone to breaking. Plastic won't shatter into pieces if hit by a branch, but it's not as attractive. There are special glasses similar to windshields that are shatter resistant, but these will cost you a little more.

Designer tree houses often consist of multiple stories with a number of rooms and offer details such as winding staircases and running water. Some even boast luxury features such as hot tubs and solar lighting. These tree houses generally range from 250 to 2,500 square feet (23.22 to 232.25 square meters), and the options of what you can have are only limited by what you can afford. Prices range from $20,000 to $350,000, and can even go much higher than that [source: Conscious Choice]. The sky, quite literally, is the limit.

It's hard to pinpoint when exactly the modern day designer tree house revival started, but there are a few notable people that can be credited for the renaissance.

In 1991, Michael Garnier opened a bed and breakfast in the branches near Cave Junction, Ore., called the Out 'N' About Tree house Treesort. In 1997, Garnier founded the annual World Tree House Association Conference at his "treesort" to create a place for tree house builders and enthusiasts to come together and share their ideas. A mechanical engineer suggested that a tree house platform could be perched on a steel cuff and secured with a steel bolt, in lieu of pinning beams to the tree. Over the next two years, conference participants came up with a cuff and bolt design that holds up to 8,000 pounds (3.628 tons). It was named the Garnier Limb.

Another major player in tree house circles is Pete Nelson, known as "Mr. Tree House" to his friends. Nelson is a master builder and author of several books about tree houses. He co-founded Tree House Workshop with partner Jake Jacob, and they've been building custom tree houses since 1997. Nelson and Jacob integrate this reclaimed wood into Tree House Workshop projects, and they are known as the go-to builders for groundbreaking arborial designs.

Bill Compher is the proud owner of the vacation destination Cedar Creek Tree house in Mt. Ranier, Wash. The main cabin, which was built in 1998, is perched in the trees of a lush rainforest, 50 feet (1,524 centimeters) off the ground in a 200-year-old giant cedar tree. In 2001, Compher added a tree house observatory that he built himself because he couldn't find anyone else to do it. Compher and his son added spiral staircase around the trunk of the tree to provide access to the observatory and named it "Stairway to Heaven." In 2004, a brightly colored bridge was hoisted to connect the two tree house structures.

Corbin Dunn gets the prize for having the largest habitable tree house in the United States. He started building it when he was 20 years old, and he lived in it for five years in the 1990s. The house came tumbling down in early 2009, leaving a kitchen sink hanging by the pipes. Fortunately, Corbin had moved on by that time.

Climbed Up a Tree and Came Down a Hero

In 1997, Julia Butterfly Hill climbed 180 feet (54.864 meters) into a redwood tree and lived there for almost 2 years, braving the wind and weather to protest the destruction of the redwood forests in Humboldt County, Calif. She affectionately named the 1,000-year-old tree "Luna," and slept on a platform in the branches surrounded only by plastic tarps. Hill got her point across after her infamous 738 day "tree sit," and the Pacific Lumber Company agreed to spare Luna and all of the trees within three acres.