How to Tile a Ceiling

Browse the article How to Tile a Ceiling 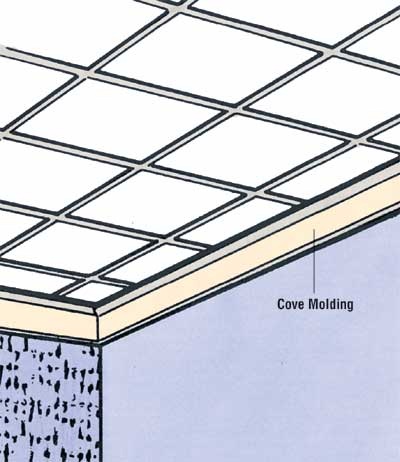 The fastest way to get a new ceiling is to install ceiling tiles directly to an existing drywall ceiling. If the ceiling surface isn't sound or has open joists (a horizontal supporting element that usually runs from wall to wall), staple the tiles to furring strips (thin strips of wood used to support the finished surface of a room). Alternately, you may be able to lower the ceiling with a suspended ceiling system if the ceiling is high enough.

To determine how much tile you need, multiply the room's length by its width to get the square footage, then add about 10 percent for trimming and errors. To figure how many boxes of tile you need, divide the square footage by the number of square feet of tile in a box. If the room is not square or rectangular, draw a sketch of the room on graph paper, using each square on the paper to represent one square foot. Then count the squares to determine how many tiles you need.

To apply tile directly to the existing ceiling surface with adhesive:

Step 1: To find the center of the ceiling, measure and mark the midpoint of each wall. Stretch a chalk-box line between opposite midpoints and snap the chalk line. Repeat in the other direction. The center is where the lines cross. Use a carpenters' square to make sure the lines form 90-degree angles.

Step 5: Apply adhesive to the back of the trimmed corner tile with a putty knife, putting daubs of adhesive in the center of the tile and about 1 1/2 inches in front of each corner. Place the tile into the corner, tongued edges out, and slide it into position exactly within the two chalked lines. Press it firmly into place.

Step 6: Cut border tiles to work out from the corner tile along the two corner walls. As you work, slide the grooved edges of each tile over the exposed tongues of the last tiles to lock the tiles firmly together. Fill in between the border tiles with full-size tiles in an expanding wedge pattern, gradually extending the rows of border tiles and fanning tiles out to cover the entire ceiling. Note: To work around light fixtures, hold the tile up to the ceiling before applying adhesive. Mark and cut off the portion to be removed, then apply adhesive and slide the tile into place.

Step 7: Continue setting tiles until you reach the far corner of the room. Before cutting border tiles for the two far walls, measure the gap left beyond the last full tile. Mark and cut border tiles along these walls one by one to make sure they fit the gap.

Step 8: Install cove molding along the edges of the ceiling.

Some ceilings are too uneven or badly damaged to install tiles directly on them. You need to use furring strips to even things out. Instructions for doing this are in the next section.

To install tile over an uneven or badly damaged ceiling, nail furring strips across the ceiling.

Step 1: Locate each ceiling joist in the room, and mark them on the ceiling. Nail 1 X 2 or 1 X 3 furring strips at right angles across the joists and along the edges of the ceiling with 6d common nails, 12 inches apart from center to center. Use a carpenters' square to make sure the strips are even and properly angled. Cut the strips to fit.

Step 2: To mark the lines from the starting corner for the corner tile and the first two border rows, carefully snap a chalk line each way on the furring strips. Trim tiles to this dimension.

Step 3: Attach tiles to the furring strips using a heavy-duty stapler and staples of a length specified by the tile manufacturer. Staple at an angle through each tile's grooved edges, then slide in the next tile's tongued edge to interlock the tiles.

Step 4: Cut the corner tile and set it into place, grooved side toward the center of the room and centered on the furring strips. Staple it to the furring strips, setting three staples along each exposed grooved edge. Nail the other two sides firmly into place with 4d common nails, as close to the walls as possible.

Step 5: Continue across the room, setting border tiles and then filling in with full tiles, sliding new tiles in to lock over old ones as you go. Staple each new tile with three staples along each grooved edge.

Step 6: Fasten border tiles into place at the wall, driving three nails along each trimmed tongued edge, as close to the wall as possible. These nails will be covered by molding. Trim and set border tiles for the far walls one by one as you work.

Step 7: Install cove molding along the edges of the ceiling if necessary.

Now we've covered the two most common ways of tiling directly over an existing ceiling. Time to beautify that room.